Lightning is one of the types of elemental damage in Diablo III. It is blue/white-tinted in appearance and singes bodies, leaving them blackened and crackled, with small bolts of lightning playing over them. Deaths to critical hits of lightning damage causes bodies to explode into blackened chunks with a great burst of light.

Lightning damage is dealt by a wide variety of character skills and can be found on weapons as well.

Some monsters deal lighting damage with their attacks and it's commonly-seen in the Electrified boss modifier which sends out charges each time the boss is hit. 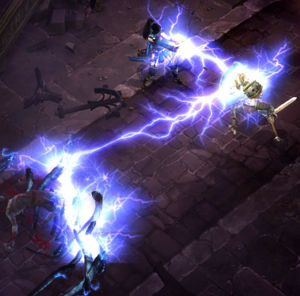 All secondary elemental damage effects except for Cold were removed shortly before release. When it was in the game, Critical Hits of Lightning damage had a stunning effect on enemies.

Many elemental effects, including lightning, are likely to return to Diablo 3 in the expansion pack, Reaper of Souls.