Escort the Weaponmaker was a quest found in the BlizzCon 2010 demo. It was a very short, simple quest, and will not be found in the final game. At least not in this form.

The quest was given by the unnamed Weaponmaker, an NPC found near the beginning of the Highlands Passage level. 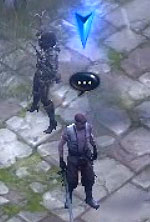 The quest begins at the start of the short Highlands Passage level, where the player spots an unnamed NPC. He asks you to help him take his revenge on another NPC. His dialogue:

The Weapon Maker: "I will make an example of Dargon, that traitorous cur. Help me hunt him, and I will sell to you, instead of those Zealots."

He speaks this message while running alongside you over a bridge, towards the first group of enemies. After they are defeated, the bridge leads to the right, past several more monsters. At that point Dargon is spotted, and he runs away, leading the player and the Weapon Maker to the final cul-de-sac area of the level.

There a bit more dialogue commences: 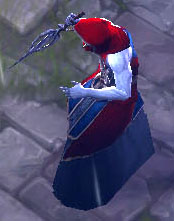 Dargon: “Master, help me. The crazed weapon-maker wants my head!”
The Cultist Master: “What makes you think I care for your life? Kill them, my pets.”

At his command, three huge Berserker champions attack Dargon and any players in the vicinity. The red-hooded Cultist leader does not fight; he merely stands at the end of the level and watches, then dies once the player gets to him and gives him a whack or two.

After his death, the Weaponmaker has a final dialogue.

The Weaponmaker: "Now that Dargon is dead, no one shall question my reputation or my resolve. Now for my goods. You’ll find none better!”

The reward for this quest is that the Weaponmaker opens up a merchant window right there in the dungeon. Players can then buy or sell items as though they were in town. (And since there was no town in the Blizzcon 2010 demo, that was a nice feature.)

In the Final Game?[edit | edit source]

This quest will not be in the final game, at least not in this form. It was hardly even a quest at the Blizzcon demo; the entire dungeon level took less than a minute to run through, and the monsters in it were always the same. Furthermore, the Cultist Master didn't fight, or even move. Only his speech was enabled, not any sort of AI to attack, run away, or anything else.

Likely Dargon, the Weapon Maker, and the Cultist Master will be found in the final game, in a quest something like this one, but it will be much larger and more elaborate, and will not take place in such a tiny dungeon level.

A selection of images from the Halls of Agony.