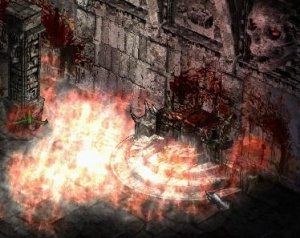 The Compelling Orb was an artifact used by Mephisto to control the Zakarum priests and followers. It was also used to shield his lair, the Durance of Hate. 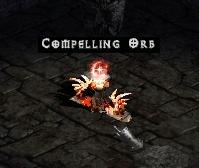 The Orb was used to great effect turning the whole city of Kurast and great number of followers into mindless fanatics for a cause they did never truly believe in, at least not supporting a Prime Evil like Mephisto.

What the Lord of Hatred created the Compelling Orb with is unknown, but Deckard Cain explains to the heroes that only a mace forged by the one righteous priest of Zakarum can destroy it, revealing Mephisto's lair (the Durance of Hate) and release the priests and followers of the Zakarum from the demon's powers.

The heroes forge the Khalim's Will mace using body parts of the former Que-Hegan called Khalim in the Horadric Cube and killed the High Council of Zakarum before smashing the Orb, and gaining access to the Durance of Hate.

The Compelling Orb has only been used once, and that is in Diablo II. How Mephisto made it, and if it would be possible to make one again is unknown.