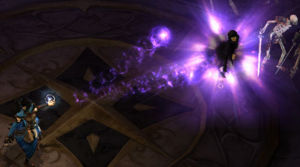 Magic Missile is an active attack spell in the Wizard's Arcane Skill Tree. The 'Magic Missile' spell fires missile(s) of energy at your enemies causing arcane damage to them. Critical hits from arcane damage silence targets for a short time.

The information below is based on the playable demo build at BlizzCon 2008. It is likely that there will be more than one rank of this spell in the final version, and is subject to all kinds of reviews, changes, and balancing before then.

There are no prerequisites for this skill.

Magic Missile's effectiveness is increased by a variety of spells, the most noteworthy of which is Improved Magic Missile, which increases both the damage and number of missiles released on a cast. The range and spread of higher levels of Magic Missile is reminiscent of the Diablo II Necromancer's Teeth. When an enemy dies at the hands of an Arcane spell, a purple glow is left on the corpse.