At some point during your progression through Act 5, you will be invited to talk to Kormac (check the exclamation mark hovering over his head). The following dialog will take place. 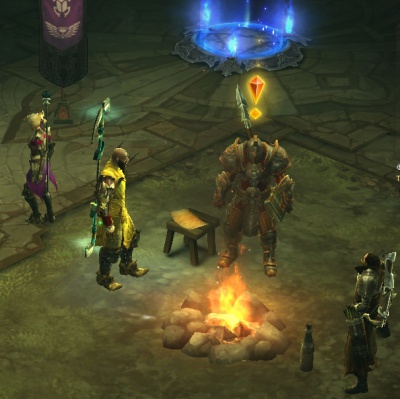 Kormac: "Today is the day I find out how deep the orders corruption runs."
Nephalem: "If you do not act, you are complicit in their deception, Kormac."
Kormac: "I will do it, even if it means going against my entire order. I could use a good friend by my side."
You have then the possibility of accepting a new objective. This is the beginning of The Templar's Reckoning event. 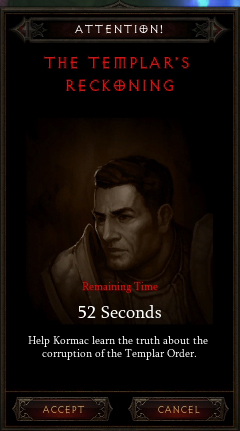 Upon acceptance of the new quest, you enter a dungeon area called "The Secret Templar Stronghold" where you ultimately have to kill the Grand Maester. 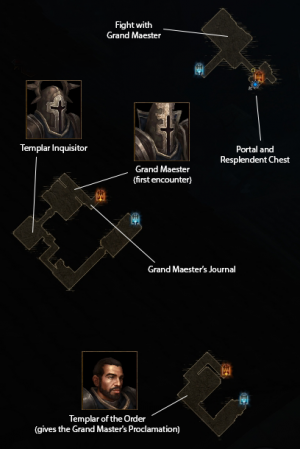 Kormac says "This is one of our strongholds. I will have my answers soon." The Nephalem replies "Be prepared, Kormac."
Moving down the alley, you encounter a Templar of the Order who you can start a conversation with.
Templar of the Order: "Kormac! Everyone says you helped slay Azmodan and Belial! They're calling you the greatest of all the templar!"
Kormac: "It's good to see you as well, brother. But I come with troubling news about the order. I must speak with the grand maester."
Templar of the Order: "You're in luck! He's here. Standing orders are to send you to him upon your return. Take this-the grand master's new proclamation."
This proclamation is a People Lore Book that can be viewed in the Gallery.
You then move on to the next room where you hear a Templar Inquisitor saying "Bring me that whip. It's time to purify the initiate". A conversation with the Inquisitor can be initiated at this point.
Kormac: "Stop! How can you do this to your fellow templar?"
Templar Insquisitor: "We bless them with the truth, as we did for you, Kormac. But if the greatest of all templar wishes them freed, it shall be so."
After the prisoners are freed, the Templar Inquisitor says "We've been ordered to take you to the grand maester as soon as possible. Follow me."
So, you move along a dark alley to reach a room where you encounter the Grand Maester and his guards.
Grand Maester: "Kormac! The shining example of a true templar! We have much to talk about."
Kormac: "Yes we do, grand maester. You have betrayed us all, starting with torment of our initiation!"
Grand Maester: "It was brutal, but necessary. I did the hard things no one else would-for the ascension of humanity. I carry the weight of my actions with me always. Are you ready to make a similar sacrifice, Kormac?"
Grand Maester: "Will you stand with me, and become maester in due time? I need you."
Kormac: "But... I... No! Your power has driven you to madness if you think I would help you rule over mankind."
Grand Maester: "This saddens me greatly, my son. I am sorry. Kill him." 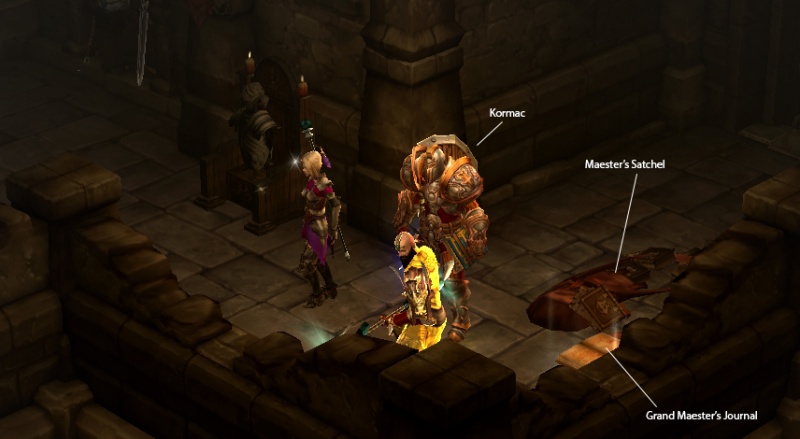 Now it is finally time to dispose of the Grand Maester. Once this is done, Kormac says "I dedicated my life to a lie. Everything I thought I knew... It was all in the service of a madman. I swear that every templar I meet will be freed from the lies of the order. And if they refuse, I will be forced to convince them." Your follower, being nice, adds "They will believe you. I know it".
You eventually reach a portal, located next to a Resplendent Chest. This allows you to go back to The Survivors' Enclave where Kormac says "The grand maester. Behind the order's corruption. Deep down, I think I always knew. Perhaps that's why I never felt worthy of the order. As if I was not a true templar". On which you reply "They could not fool you forever. But now that you know the truth, what will you do?". Kormac concludes "I believe in you and your quest. This world must be saved, regardless of the corruption of the templar."
Isn't it great that someone believes in you?