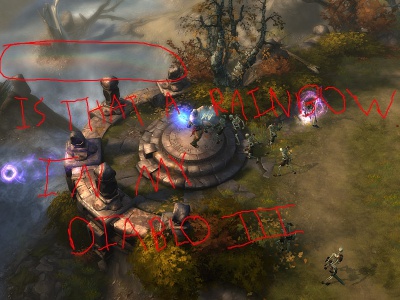 Rainbows are colorful displays in the sky created by light reflecting and refracting in sunlight.Wikipedia.org In Diablo 3 however, they speak of a darker origin.

Rainbows first became a thing in Diablo 3 when the initial gameplay video was released at the game's announcement in June 2008. Most fans loved their first look at the game and thought the 3D engine was a big improvement over Diablo 2's pixel-based graphics. A sour note was sounded by some fans though, in what quickly came be known as the Art or "Color Controversy." (See the Art Controversy article for full details.)

This was kicked off largely by one scenic view of a waterfall from a bridge in the first gameplay video. (That area and the rainbow can be seen in the finished game in Act One, where a bridge passes from the exit of the Spider Caverns over to the Northern Highlands.) A pretty view to some, a rainbow nightmare to others.

From that beginning, a whole "not gothic enough" argument developed, and while rainbows weren't specifically a target of fan anger, they became a symbol of the "too colorful" complaints, and a sort of shorthand for the entire debate/complaint over the graphical style of Diablo 3.

The game's developers disputed the "not gothic enough" complaints, while also taking them to heart and making some changes to add gore and blood and grit[1] to the game's artwork.

They also took the Rainbow and colorful complaints and made a lot of jokes about them, from inserting rainbows into video of character animations shown at Blizzcon, to making Diablo 3 T-shirts with rainbows, clouds, and cute unicorns, to referencing Rainbows in Blizzcon presentations. 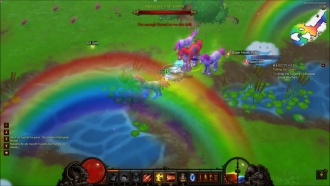 The biggest reaction, of course, was the absurdly-colorful fantasy land of Whimsyshire, the game's secret level and biggest Easter Egg. That area, modeled after Diablo II's famous Secret Cow Level was accessible only by farming several rare objects, crafting them into a Staff of Herding, and then entering the level after an absurd conversation with a ghostly Cow King.

Post release most of the Art Controversy faded away, but it's often assumed that some lingering concerns about the game being dark enough were a driving force behind the design of Act Five, which is almost entirely dark, gothic, foggy, gruesome, and so on. Exactly the tone and theme fans were complaining about in the original Art Controversy.

It's curious to wonder if the design aesthetic of Act Five had been part of the game's original reveal back in 2008, if the Art Controversy would ever have developed? Or even the opposite; would players have felt the game was too dark and gloomy in visuals, and all the brightly-colored parts of Diablo 1 and Diablo 2 that "too colorful" complainers were referencing would have been brought up as elements that Diablo 3 was lacking?