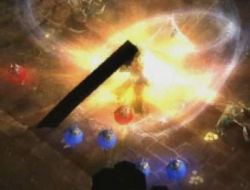 Mana globes and a level up.
Mana Globes were orbs of magical energy that functioned much like Health Globes; they restored mana (25% of the maximum as a default, though some character skills were designed to boost this total) when a character picked them up. As you might expect, they looked just like health globes, but were blue, instead of red.

Mana globes were removed from the game prior to the Blizzcon demo build in August 2009.

How They Dropped[edit | edit source]

When mana globes were a feature, they only dropped when a Witch Doctor or Wizard was in the game. At that time Wizards used mana for their resource, and had a (since removed) skill called Mana Recovery which gave a % chance for a dead monster to drop a mana globe. Mana globes did not benefit Barbarians, since they did not provide any boost to their Fury resource. Monks and Demon Hunters were not in the game at that time.

The Diablo 3 team explained that while mana globes were functional, they weren't necessary. Only Wizards (prior to their mana becoming Instability, and then Arcane Power) and Witch Doctors were able to use mana globes, and this added needless complexity to the game. It was easier to make health globes replenish both health and mana. This is not always the case; Witch Doctors must spend some points in the various skills and traits to enable them to gain mana from health globes.

Diii.net: Do you envision the health globes will boost [non-mana resources] in the way that the Wizard and Witch Doctor gained mana from them at Blizzcon?
Jay Wilson: Um, maybe? *sounding intrigued* Usually in the third or fourth skill revision on classes we look at that kind of thing. For the Witch Doctor we figured that a lot of the mana things we had on the Wizard would work better on the Witch Doctor. We were having trouble maintaining enough mana while play testing the Witch Doctor. Especially if players didn’t take a specific mana recovery skill. So we focused on spreading that out across a lot more of the class so he can pull mana back more easily. When we get to other classes I’m sure we’ll look for more of that.