ADVERTISEMENT
From Diablo Wiki
(Redirected from Halls of the Dead)
Jump to: navigation, search

The Hall of Fallen Heroes is a UI-based interface that allows you to see your dead Hardcore characters via your in-game profile. [1]

We have plans to create a Hall of the Dead where your can view your deceased HC characters, and you will probably also be able to view fun and interesting statistics about them.

The name has changed from "Halls of the Dead" to "Hall of Fallen Heroes", as of February, 2011.

The dead character will not[2]take up one of your ten live character slots. Although not much else is known, it has been confirmed that the dead characters will not be able to be taken into a game to walk around and look at. [3]

...but it's probably just going to be in the UI. Maybe someday it'll be a big awesome hall!

Hardcore was implemented in Beta Patch 14, which also debuted the Hall of Fallen Heroes.

Once a hardcore player has been slain, they will be directed to the character selection screen where a new button will appear: archive. The player may archive a fallen hardcore hero, and it will be retained in the hall, which is, as stated above, part of the player profile.

Once there, a few stats are tracked by the game client:

There are a limited number of slots available in the hall, but the precise number is still unknown. The dead HC hero must be at least level ten before being allowed into the hall. 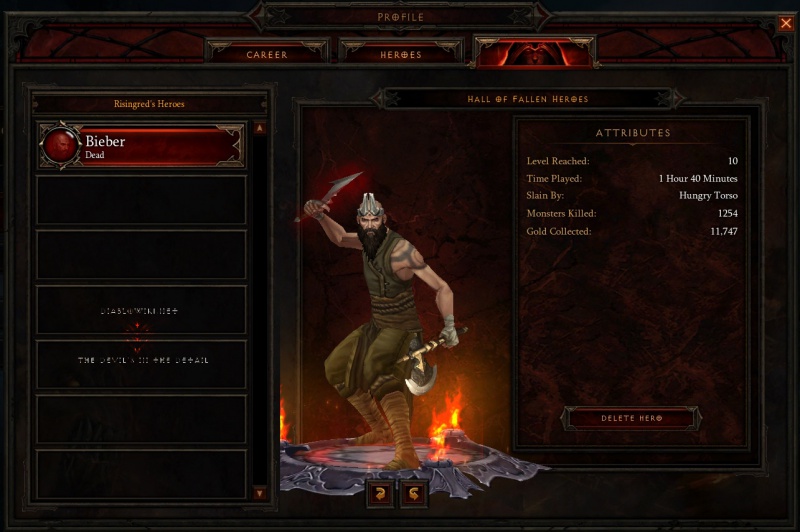 The Diablo III development team has been cutting features as of early 2012, presumably to meet some kind of release date that occurs before computers become sentient, making programs ironic. There was a possibility that the Halls of the Dead would not appear in the final game, per Bashiok[4]:

[The Halls of the Dead] was a wish list feature we mentioned at BlizzCon right? Don’t know if it’ll make it. It’s on the list.

However, he never mentioned the Hall of Fallen Heroes, and was perhaps being a bit sneaky, as it is currently in the game and playable by beta testers.

Diablo II Hardcore did not have any such feature, and dead Hardcore characters continued to occupy one of the eight slots on a Battle.net account. This forced players to delete dead characters eventually to clear our space, which could be a sentimental moment for a player.

Players went to lengths to record the existence of their Hardcore character. Fansite Diabloii.net [5]launched a Hardcore Graveyard in mid-2000, just weeks after the game's release. It presented screenshots plus captions that shared various useful details about the tragedy:

In the years since then, players have maintained other such graveyards.