Elective Mode is the name Blizzard gave to a game mode enabled by checking the appropriate box in the Options > Gameplay menu. Clicking this box enables players to select almost any active skills for any Diablo III character, including multiple skills from the same categories. In elective mode, these skills can be freely mapped to any of the LMB, RMB, 1, 2, 3, 4 keys.

There are some limitations on which skills can be mapped to the left mouse button, since that controls movement as well. A skill that always casts at a location, or one with a long cooldown might not be allowed on the LMB; these vary by class.

Elective Mode came into the game with the skills and runes overhaul in Beta Patch 13. This patch introduced an entirely new skill interface, with the old easy menu removed and a new system where every class had six categories of skill types, grouped so that only one skill from each category could be enabled at a time. This system was designed to be more noob-friendly, so that new players to the game would get guidance (or control) for which skills to use together and in which order.

Jay Wilson offered a full article explaining the system when it was first introduced, with some mentions of Elective Mode at the time:[1]

One of our other goals is to ensure our game controls and interfaces are easy to use so that players spend their time trying to master game mechanics rather than fighting an interface. Giving players complete freedom to choose “anything” with no direction as to how our systems are intended to work was a failure in our design. There was also a detached relationship between the bottom-bar UI and the skill system. We have six skill slots, and six spots to put skills, but the two interfaces didn’t really interact, and stocking abilities in your interface felt awkward.

To fix these issues, we focused on two core changes: (1) exposing the skill design intent by categorizing the skills and (2) linking skill selection directly to the bottom-bar UI to make assigning skills a clearer process. When viewing the skill screen, you’ll be presented with your six skill selection slots; each of these correspond directly to your bottom bar, and each will provide a specific list of skills from which to choose. By providing a clear-cut guide on how to best maximize your build potential, we hope to cover that “easy to learn” half of the mantra.

You may already be fuming because you’re a “difficult to master” type of person, but before you run to the forums, we have you covered. In the Gameplay options, we’ve added an ‘Elective Mode’ for the skill system. With this checkbox ticked you’ll be able to place any skill in any skill slot, as freely as you could before. The Elective Mode option is available at any time with no requirements or need to unlock it. We hope the new, more guided interface will give you an in-game heads up as to the intent of each skill — and maybe even be the way you play through the game in Normal — but if you eventually have a build that simply can’t be accomplished the way we’ve laid things out, you’re free to pop on Elective Mode and take the skills you want.

While most experienced players could see the value of that, there have been constant fan complaints and confusion[2] [3] [4] [5] [6] [7] [8] [9] [10] since the system was introduced. Many players feel that Elective Mode should be the default and that the current system should be called "Tutorial Mode" or "Cookie Cutter Mode" or something along those lines. Barring that, players at least want the Elective Mode to be made much more obvious, with the check box showing up on the skill interface itself, or some sort of tooltip warning/informing players that their build options are being artificially restricted by the default skill system.

Blizzard has resisted making any such changes, as explained by Jay Wilson in an interview in early June, 2012:[11]

You guys are savvy and awesome, but you aren’t most players. We had ‘overwhelming’ feedback from internal testing of a variety of skill levels, including internal devs, usability testing, etc. The testing we did showed that the skill system and pure maths in the skills was creating a lot of confusion for many players, and turning them off from the game. For this reason we won’t surface these options more than they currently are, we simply don’t see a good enough reason to risk push this up and risk hurting the experience for one of these players.

I know this isn’t what you wanted to hear. I know the fact that some people might be overwhelmed by or flat out prefer to not use elective mode and advanced tooltips seems incredulous, but there it is. We get tons of comments from players who are playing the game with their non-gamer friends and family, thanking us for making a game that appeals to gamers and non-gamers alike.

Doing things like this equals more people in the Diablo community, which is good for the game as a whole and the community.

Everyone who wants to play with elective mode finds it eventually, we’re adding more in-game hints to point to it once you get past normal difficulty. But ultimately we don’t think it’s a horrible loss to play without these things while you’re learning the game, even if you are an advanced player.

The check box is in the lower right of the Options > Gameplay menu, accessed most easily by hitting the Esc key at any point during the game or in the character selection menus. As seen in the full screenshot below. 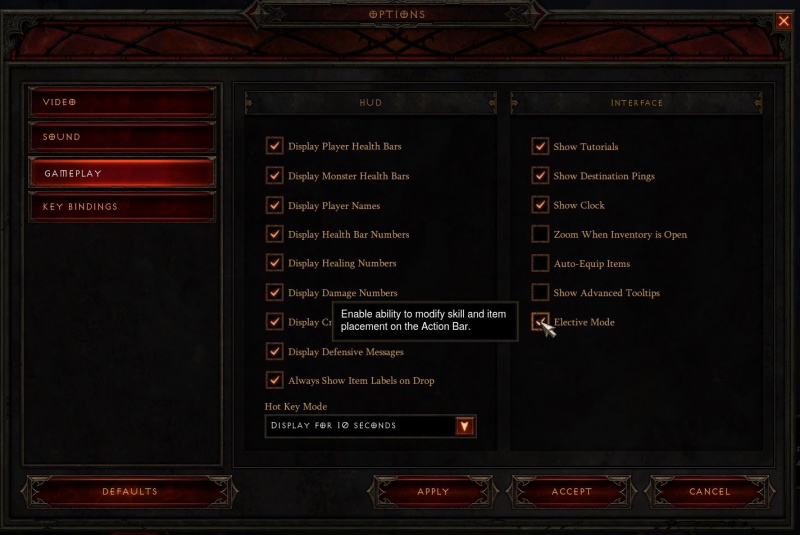