Blizzard Entertainment employs some of the best artists in the gaming industry, and their work in creating concept art for the characters, monsters, NPCs, and environments of Diablo III shows off their immense talent. The articles in this wiki are lavishly decorated with their works, but the wiki article format allows only small versions of the original works. Interested parties are encouraged to view the full sized works in all their digital glory. 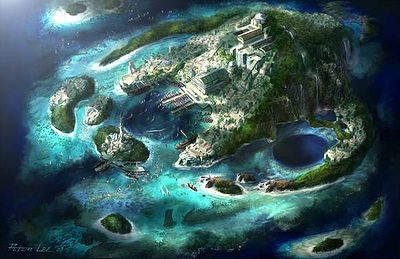 The Islands of Skovos. By Peter Lee.

The most comprehensive collection of Diablo III Artwork can be found in the image gallery at Diii.net, the Unofficial Diablo 3 Fansite. They host every piece of Diablo 3 Art Blizzard has ever released, either digitally, or from photos taken of various Blizzard art displays on the Blizzard Campus, at Blizzcon, or at art galleries around the world where Blizzard's art is often shown.

Diablo III Art: Environmental Art -- Over one hundred illustrations of the cities and natural landscapes of the world of Sanctuary.

Blizzard's artists produced excellent work for Diablo I and Diablo II as well. Unfortunately, very little of their original concept artwork has ever been released in digital form, or displayed publicly. (Visitors to Blizzard North's old offices in San Mateo saw a great deal of art on display that never made it to the Internet.)

All of the art that was released is also housed in the Diii.net image gallery.

Diablo I Art -- Mostly images included in the Diablo Manual, since the original concept sketches have never been published.

Diablo II Character Art -- Nearly one hundred images of the Diablo 2 characters, including concepts and computer rendered pieces. The detail level of the characters and their armor, indistinguishable in the tiny pixels they are reduced to in the game, are nice to see at full size.

Diablo II Monster Art -- Nearly one hundred images of the demons and creatures that popular the game are collected here, including numerous pieces of concept art showing monsters that look nothing like those seen in the final game.