A Binding Stone is a magically infused stone used to hold something. Only one is known to have been made in the history of Sanctuary, and that's the Binding Stone that Tyrael helped the Horadrim to make, which held Tal Rasha in place for decades, imprisoning Baal within his own soul. 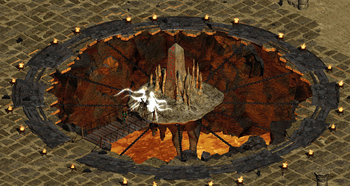 The Binding Stone with Tyrael next to it.

The Binding Stone was made by the Horadrim and inscribed with magical runes indecipherable by mortal men after Baal was defeated. The mage Tal Rasha was bound to it with magical chains and had the Soulstone of Baal thrust inside his flesh.

The chains and stone held for many centuries until the dark Wanderer came and freed his brother with the help of Marius. If the Binding Stone is still located in the Tomb of Tal Rasha is unknown.

A Binding Stone is either just a magical stone to keep something or someone in place, or could possibly even be a makeshift Soulstone created with the limited materials available on the mortal plane. It's clear it can bind other things than Prime Evils, however, as Tyrael was bound to it by Baal and the Wanderer after he failed to stop the demon being freed.

If they can be corrupted like Soulstones is unknown, and if it's even possible to move it or permanently destroy it.