The Diablo III Armory is the unofficial name of the in-game system for viewing the items, skills, runestones, stats, and other character information on all of the characters on your Battle.net account. It was enabled as an undocumented feature patch 6 version[1] of the Diablo III Beta in late-November, 2011.

It's not known what differences the final game system will have over the Beta version, but it is widely expected that the Armory will be available via a browser, rather than just the game client. Mobile device access, probably for a monthly fee, seems likely as well.

As enabled in the Diablo 3 Beta, the Armory allows quick and easy browsing of the items, stats, skills, and more, for each character on your Beta account. There is no way (currently) to view anyone else's characters; just your own. Several sample screenshots can be seen below.

Currently during the beta test, this feature can only be accessed via the game client, and only characters on your account can be viewed. However, it is assumed the Armory will be accessible via browser and perhaps mobile devices as well, post-release, as the World of Warcraft Armory was. In the WoW system, all characters were visible to anyone; making it a paradise for curious/nosy players, and a headache for players who wanted to keep their characters hidden from others. 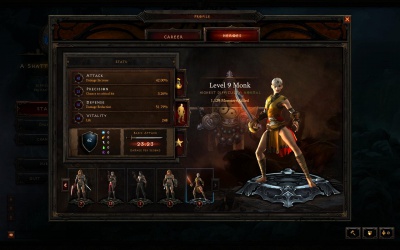 A Beta character's stats viewed via the Armory.

One of the major objections to the World of Warcraft Armory system was the loss of privacy. As the system had no opt-out feature, anyone could go online and view your WoW characters without your consent or knowledge. Besides the loss or privacy, many players felt it was a competitive disadvantage in PvP as opposing players could scout out your equipment, skills, talents, etc, in advance. In addition to in-game concerns, the WoW armory also raised privacy concerns as it would publicly list what a player had done in-game, and when they had done them. Some were fearful that employers would find that their employees had been in the game while on the clock (as even buying an item of a certain quality would show on the armor similar to the updates on a facebook "wall"), or other concerns of privacy overs who may be stalking them, whether they are players or not. Some of the things tracked on the armory include epic-quality items gained, achievements earned, dungeons completed, and more. Each listing is time-stamped with when the action occurred.

Blizzard was unresponsive to this objection, and in fact went so far as to ridicule objecting fans with the Tin Foil Hat item, which was one of their April Fools' pranks in 2007.

There's no word on whether the Diablo III Armory will repeat this state of affairs, but it's clearly a player concern, as evidenced by many of the comments in early Diablo 3 armory news items.

While it had long been widely-expected that Diablo III would offer some sort of character/skills/items viewing system, similar to the Armory in World of Warcraft, the first official comment on the potential feature came via the @Diablo twitter feed in July 2011. [2]

Will there be an inspect feature in D3, both in-game and an armory-like page? –Doomscream
Extremely likely if not completely assured for both. –Diablo

The system was no-doubt well under development by that point, for @Diablo to comment on it so strongly.

A video of the Armory in action can be seen here: