The Anvil of Fury can occasionally be found in what remains of Griswold's old Blacksmith shop in The Old Ruins, formerly Tristram. It used to yield a Griswold's Edge when looted but now it will spawn a random item.

The anvil is a reference to the Anvil of Fury which was a quest in Diablo I. 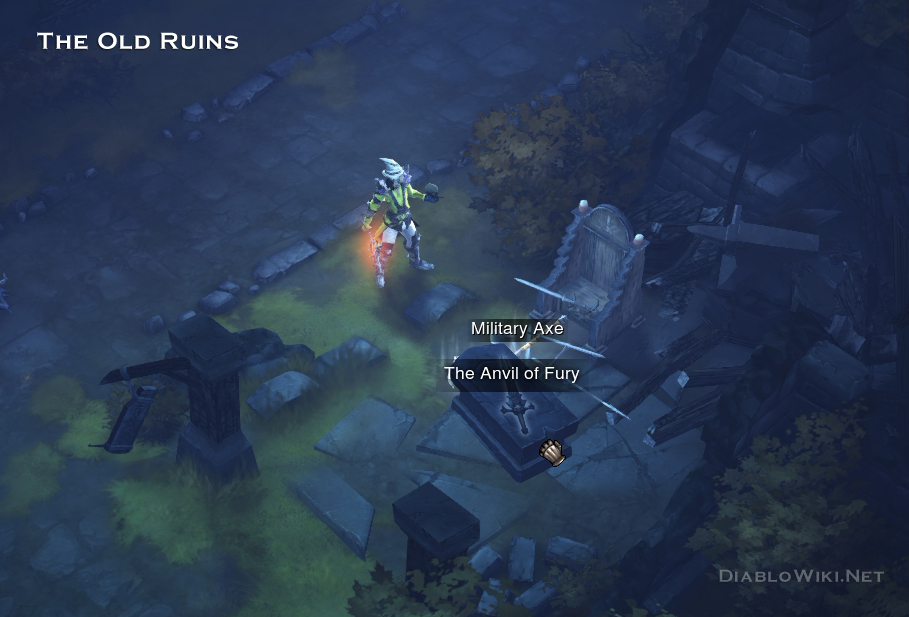 This is what Griswold had to say about it in Diablo I.

"Greetings! It's always a pleasure to see one of my best customers! I know that you have been venturing deeper into the Labyrinth, and there is a story I was told that you may find worth the time to listen to...

One of the men who returned from the Labyrinth told me about a mystic anvil that he came across during his escape. His description reminded me of legends I had heard in my youth about the burning Hellforge where powerful weapons of magic are crafted. The legend had it that deep within the Hellforge rested the Anvil of Fury! This Anvil contained within it the very essence of the demonic underworld...

It is said that any weapon crafted upon the burning Anvil is imbued with great power. If this anvil is indeed the Anvil of Fury, I may be able to make you a weapon capable of defeating even the darkest lord of Hell!

Find the Anvil for me, and I'll get to work!"