Aggro is an RPG term that describes who the monsters will attack first. This measurement is called "hate" or "threat" in some titles. Aggro is short for "Aggression."

There has never been much use of the aggro measurement in the Diablo games, where monsters have generally attacked whoever is closer, whether player or minion. Other RPGs, especially those based around raiding and large group encounters, use Aggro extensively as part of the strategy of the game. Players must manage the aggro of various monsters in those titles, so the monsters will keep attacking the tanks, rather than growing more aggro towards the casters or support characters and going directly after them. This is done through tanks using skills to raise their aggro while other characters cast various debuffs or manage their line of sight to the enemy.

A quote from the wikipedia page:

A game may calculate hate generated (aggro gained) by a player on an NPC based on factors such as: 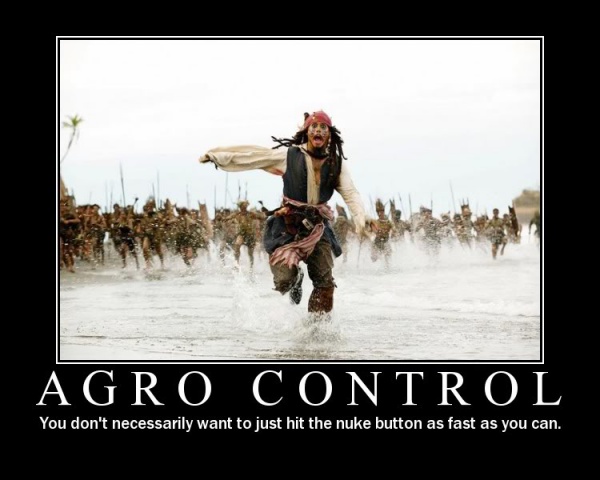 Illustrated example of the perils of improper Aggro management.
Retrieved from "https://www.diablowiki.net/index.php?title=Aggro&oldid=28346"