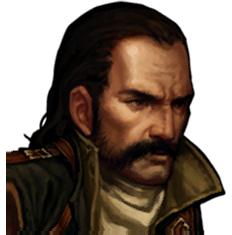 The player portion of the conversation can differ depending on the class and gender.

Player (Wizard): You must miss your family during times like these.

Scoundrel: No point in it. I'll never see them again.

Scoundrel: My brother's wife thinks I was... involved with his imprisonment, and he believes her.

Scoundrel: As low as I am, I would never frame him. Not even to win her back. But they won't hear a word of it. For all the gold I send to them, I receive nothing in response.

At the end of Act III, after stepping through the portal, you will appear at the Diamond Gates. There is a waypoint just before you reach Tyrael - step in it and head back to Bastion's Keep Stronghold. It is not necessary to talk to Tyrael to activate this conversation.

For players who are returning for achievement, select quest Act IV "Fall of the High Heavens". Your start point will be at the Diamond Gates.

A Lost Family (Act IV) is in some way involved in the following achievement(s).