The Wraith is an incorporeal undead type of monster that can drain attributes such as life, mana and speed from a character.

Wraiths return in Diablo III, and while their function looks about the same, their graphics have been substantially improved. They were seen emerging from Ghostly Orbs in the WWI 2008 gameplay movie, and it's not known if they can only come from those odd monster generators, or if they'll be found roaming (floating) freely in the dungeons as well.

Wraiths have a melee slashing attack, and a ranged life drain attack as well. That one has a lovely graphic, with a swirling stream of blueish vapour flowing from the character to the Wraith. Characters under such an attack also suffer a substantial penalty to their movement speed.

Over all, their damage dealt does not seem to be substantial, and it's mainly a matter of ploughing through the movement drain and kill them, or the Ghostly Orbs, whichever is the source of grief.

Will drain life to one target within a limited range. This attack also slows the target considerably.

The Spectral Warrior was revealed in concept art in April 2011. It appears to be a Wraith with more formed legs, but it's not confirmed that this is a subtype of the Wraith. They have only been seen in screenshots and artwork; not yet observed in a playable demo.

A great deal of undead creatures comes in incorporeal forms, such as Wraiths. This type of undead is the ectoplasmic manifestation of a soul that chose to stay in the mortal realm after losing its normal life, a spirit that has been forced to stay through magic, or perhaps pulled in to the mortal realm from the spirit world. Depending on the type, they usually require weapons of magical nature to damage, and they are experts in draining speed, energy or health from anyone that would have a close encounter with them.

No monster like the Wraith is seen in Diablo I.

Wraiths were seen in Diablo II and also had a similar, even if it was simpler, appearance. The Diablo II Wraith also drained attributes from any player character coming in contact with it but did not, as the WWI 2008 gameplay movie showed of Diablo III, "drain speed".

Wraiths have seen a great development from their first appearance in Diablo II, including a better graphical presentation of the monster itself, as well as the attack animations. The drain ability that is used with some range has a beautiful way of showing that your character is in trouble. The first appearance of the Diablo III Wraith was shown at the WWI 2008, in the gameplay movie. 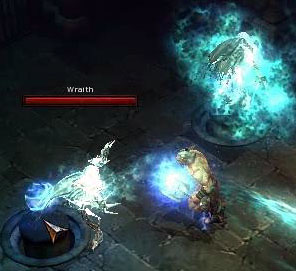 To be absorbed into Ghosts as Wraiths aren't a type in Diablo 3.
Retrieved from "https://www.diablowiki.net/index.php?title=Wraith&oldid=68108"