The Monk is a melee/caster hybrid, with focus on martial arts close combat. He's like a mix between the Assassin and Paladin from Diablo II, and shares a few traits with the Monk of Diablo: Hellfire.

The male Monk character comes from the Monasteries of Ivgorod in the Foothills. They are taken into the Monastery at a young age, where they are taught ancient knowledge, belief in 1001 gods that are in everything (one god in water, one god in fire, one god in the air, etc.), meditation to remove sins from the body and martial arts.

The Monks have a fondness of structure and creativity, which is why they have various symbols on their bodies and their light magic is brought to life through runes, symbols that invoke the light to aid them. It is said that each Monk has a tattoo on his back, that chronicles their lifetime/adventures (needs confirmation), it may take a monk an entire lifetime to finish the tattoo on his back.

He serves the Elder Monks of the monastery, who seek to destroy evil in all forms.

The Monk thinks of himself as the weapon of the gods against all that is evil, he is a peaceful, patient and a good man who aids people who suffer, with no hatred against anyone, in contrast to the Barbarian. He is adept in Martial Arts, being able to defeat multiple foes without the aid of weapons.

The "theme" of the Society of Monks is a mix of "spiritual" Buddhism and "eradication of evil" of the European churches while maintaining an Asian/Indian visual theme. Abd al-Hazir writes about an encounter with a Monk in a tavern, in his 32nd entry of the Writings of Abd al-Hazir.

The monk was partly made as an opposite to the Barbarian, with more focused gameplay. He's also quite weak, so a lot of the class design is built upon the monk debuffing his foes, to receive less damage himself.

Jay Wilson mentioned D3 Team wanted to make a character than isn't necessarily one of the easiest characters to start with, but he will even out with the other classes later on in both power and difficulty. 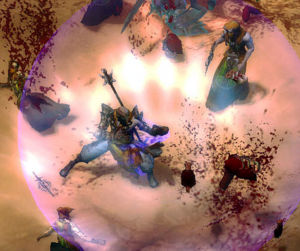 Way of the Hundred Fists in action.

The Monk's concept was that of a fighting game character, where the player could create combos by pressing the right buttons at the right time. This not so different with the Monk, as almost all skills have 3 stages. Each stage of each skill does a specific action, the player can chain these stages into a combo, being able to create 12 different combos from only 4 spells, many custom combos can be made that fit the player's style of combat.

During the BlizzCon 2009 Diablo 3 Heroes and Monsters panel, it was said that the combat style was influenced by the combat styles of the Assassin in Diablo 2: Lord of Destruction and the Rogue class in World of Warcraft.

The Monk skills are arranged into to three distinctive skill tree categories:

The monk use a very special combat system that is better explained above.

The A-Tree seems like a "Combat" skill tree, with skills related to dodging, or manoeuvring in combat.

The B-skills kind of look like a debuffing tree, where you make your opponents weaker (or part of your arsenal with Exploding Palm.

The C-skills seem to be the "Holy" skills, with power infused by the Light, especially Impenetrable Defense.

The Monk was the Fourth class to be revealed by Blizzard, debuting during the opening ceremony of BlizzCon 2009, in front of 26,000 cheering fans and countless DirecTV viewer. As with much of Diablo III, the D3 team took inspiration from old Pen and Paper RPGs and from Fighting Games/Console Brawlers.

There is no female Monk at the moment, but according to Jay Wilson, they have started the process on creating the female Monk.

The first we ever heard of the Monk was almost a year ago, shortly after the Wizard was unveiled at BlizzCon 2008. Jay Wilson just commented and said us fans would love it [1].