Unburied are large, spike-covered undead type monsters. They are undead "construct" that is created wherever bodies are dumped together unceremoniously. 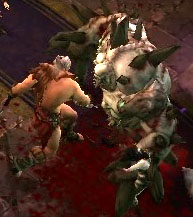