A trifecta items is a pair of gloves or a piece of jewelry that rolls with the three most-desired offensive stats in Diablo III. Such items are extremely powerful, and command high prices on the Auction House.

Even better items are colloquially called quadfecta or quinfecta items, when the three trifecta mods roll along with other very useful modifiers. The most desired is a big bonus of +150 or more mainstat, and a large +damage (possible on rings and amulets). Other modifiers such as resistance, pickup radius, +vitality, etc, are desired as well, but aren't valued as highly since they can be found on many other types of items, while the trifecta mods are limited to rings, amulets, gloves, and some legendary armor pieces that add them as special bonuses.

The terminology and rankings of trifecta mods are far from absolute; depending on build and skills and gear, some characters derive more benefit from a big bonus to their mainstat than from an Attack Speed boost. Also note that the range of the modifiers varies greatly. A rare amulet found in Inferno can roll from 5-10% CC and 30-100% CD. An amulet with a very high roll on those two affixes and no IAS is more valuable and useful than a trifecta with low rolls on those affixes.

Weapons aren't generally labeled with tri/quad/quinfecta status since DPS is the most important stat on a weapon and without that no amount of other mods will make it worth using. A weapon with a big damage roll and other useful mods, especially a socket, critical hit damage, and Life Steal or Life on Hit, is very valuable, but not referred to as a "trifecta." 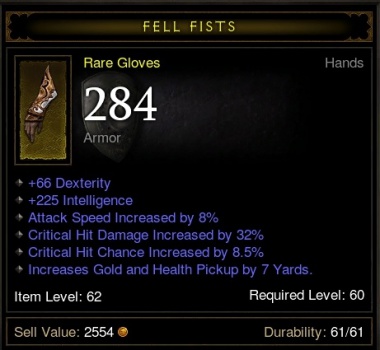 A trifecta on these gloves priced at 1,000,000,000 in the Americas GAH in December 2012. The huge bonus to Intelligence makes them a quadfecta, and the +pickup radius also adds greatly to the value.
Retrieved from "https://www.diablowiki.net/index.php?title=Trifecta&oldid=64897"