Difference between revisions of "Torajan Jungles" 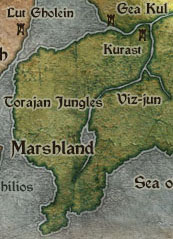 Torajan is located quite centrally on Sanctuary's world map.

The Torajan Junges are part of the dense rain forest on the Eastern continent of Sanctuary. South west of Kurast, they stretch down all the way to the south coast of the continent and the marsh lands there, covering a huge area of Sanctuary.

Among other regions, it contains the Teganze region where the umbaru race resides. Three clans are known from Abd al-Hazir's thirteenth entry of his Writings:

The D3 Team might have taken inspiration from the Toraja people in Torajaland, of South Sulawesi, Indonesia.