Are you looking for the Skeleton (lore)?

As iconic as zombies, animated human skeletons have been featured in all of the Diablo games, and just about every other fantasy RPG ever made. In Diablo 3, plain skeleton warriors are joined Skeletal Summoners, Skeletal Archers, Skeletal Shieldmen, Skeletal Executioners and more. These skeletons spawn in mixed packs and work together with much better AI than they've shown in the previous games in the series.

This "plain" sort of Skeleton with a sword is quite straight forward, and is mostly only dangerous in large packs, or together with other skeletal types. Avoid being surrounded, and kill other high priority targets first. They typically have a somewhat slow movement speed, normal swing speed, and low damage. 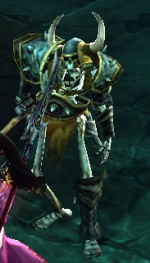 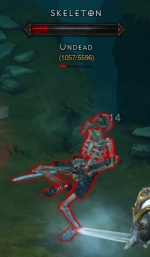 Superunique versions of Skeleton have a chance of spawning in the following areas:

During the last days of King Leoric's reign, even the skeletons of the ancient dead could not rest. They took up their broken armor and weapons once more -- ready to cut down anything that yet drew breath. Though wasted and fragile, these creatures possess a twisted cleverness that makes them quite formidable.