The Thousand Pounder is a special monster of a mini-boss variety. He is slow, but deals massive damage with his two huge maces. He appears to be a Demon. 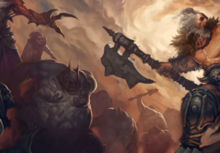 Concept art of the Thousand Pounder(s).
Thousand Pounder is a special boss monster, seen in the WWI 2008 gameplay movie and a few related screenshots. It's not known if he's one particular individual out of a whole class of big, fat, dual-wielding, tattooed Demons, or if he's a special, one-of-a-kind demon. He's not an Act Boss or a major Quest boss though, that much was made clear in the panels at the WWI event.

The Demon is summoned (as is described below), and sets to attack the player. Once he's ready to rumble, Thousand Pounder moves slowly, but with tremendous power, and deals heavy damage with his two large maces. When he smacks his two maces together, you don't want to be standing in the impact zone. In the gameplay movie, a Barbarian avoids damage by jumping around the beast with Leap Attack and uses Furious Charge to smash through the fatty monster. Other classes will likely be able to have some sort of similar mobility skills, like the Wizard skill Teleport.

When his life drops below about 50%, he kicks into an enraged mode. At that point his tattoos begin to glow red and he moves much more quickly. He retains this rage until he is killed.

The Thousand Pounder doesn't have any additional minions or other monsters to help him out, so if the player uses an avoidance tactic and tries to damage him with ranged attacks, or forces him to use his strong but slow attacks, dodges them, and counter attacks before the Pounder retaliates, he can be taken down easily. Just remember not to get hit by the maces, and you'll be fine.

Thousand Pounder is summoned up in a scripted event. The Barbarian in the Gameplay movie from WWI 2008 is running through the Forgotten Tombs when he comes upon a circle of five Dark Cultists channelling their energy to call up the Demon. At first there are three pale-skinned youths dancing in the circle. They explode one by one, and then from their blood and flesh the demon is made incarnate.

When he is defeated his death animation is basically the summoning animation in reverse; his skin sloughs off, then his muscles, before his bones clatter to the ground.