Difference between revisions of "Stash"

A Stash is a chest where a player can store items. It is an important function in the Diablo franchise, since collecting items is an essential part of each game. Characters can access their stashes from towns and cities in game, and the stash is shared between all of the characters in the account, unlike in Diablo II where each character had their own individual stash.

The Stash is divided into "tabs" each of which displays a full page of empty stash space. Only the top couple of rows of stash space are available to a new account (or at the start of a season) and players must purchase more rows in the first Tab, then buy additional tabs via in-game gold. 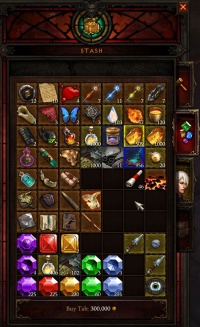 One of the biggest and longest-running complaints of many players is that the game does not provide adequate stash space. These complaints have only intensified over time, especially into the Reaper of Souls era, as each patch added additional top quality items, more viable builds, and a general increase in variety and quality of gear, causing players to want to store more and more of it for possible later use.

An August 2014 vote measured fan opinion and came back with a clear answer:[1]

How do you feel about stash space in Reaper of Souls?

In October of 2014 Josh Mosqueira commented on selling more stash space without giving a yes or no answer.[2]

Q: This could be a controversial question. One problem people have in Diablo is character and stash space. Can we buy more inventory space or character space in Diablo 3? Answer: Will we have a store to sell more stash space? Everyone wants that. Not specifically the store aspect, but we’re always discussing the issue of more space. And if we give you more you want more, and more and more and eventually all the internet is your items. We think about it and we want to address it, but nothing to say now. 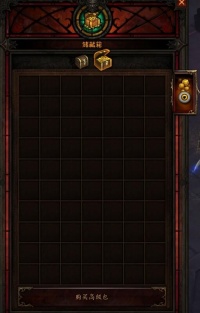 In February 2015 Blizzard announced[3] that the upcoming release of Diablo 3 in China would be a free to play game, funded via microtransactions. These would allow games to purchase powerups to boost experience and gold and item finding, as well as "stash for cash," the option for players to buy more inventory space for money.

The full details of this system were not revealed until May 2015[4] when the Diablo 3 beta test got underway in China, and when the details were known... fans in the US and Europe were actually quite supportive. Envious, even, with many voting that they'd like to see that system come to their home regions.

Blizzard avoided answering the stash space issue until finally in late 2015 they revealed that the next patch (Patch 2.4) would add an additional sixth stash tab for everyone, and that each season after that would give players the chance to earn another stash tab via the Season Journey. [5]

Grimiku: In patch 2.4.0 everyone can purchase up to 6 stash tabs with gold. However, starting with Season 5, players will also be able to earn an additional stash tab by completing specific objectives in the Season’s Journey (for a total of 7). In the next season in which they participate they’ll be able to earn another stash tab for a total of 8. Each season (starting with Season 5) offers the chance to earn 1 more stash tab until the maximum of 10 has been reached. Grimiku: Yes, stash tabs opened up via Season’s Journey will also unlock them in non-season. Currently those additional tabs open up immediately, and do not require waiting till the end of the season to benefit non-season stash space.

Once this feature went live in Patch 2.4 in early 2016, fans immediately clamored that it wasn't enough additional space, and that the requirements to earn the tab in the Season Journey were too steep, especially for non-Seasonal players.[6]

The reason for the development team adding in a shared stash is to prevent characters from muling in drop games, where the battle.net servers may drop a player from a game, items may disappear, or a host of other issues. Put simply, it was not at all convenient or safe to trade items between characters on an account. Hence, the shared stash.

The stash is natively "unlocked" for the player. It doesn't have to be unlocked via a quest like the Cauldron of Jordan or the Nephalem Cube were. It is available as soon as the player enters New Tristram. 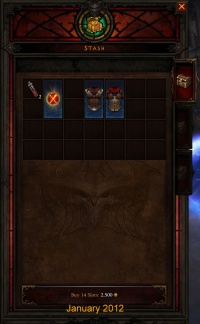 The stash is considered a gold sink. The player begins with 7x2 (14 squares) of inventory space, which is equivalent to seven pieces of larger gear, or items which only take up one inventory space, such as amulets, or scrolls.

The stash can be upgraded in 4 increments of 14 squares. Each set of two rows costs 10,000 gold each. After the player has maxed out the first page of the stash, they will be able to purchase an entirely new tab for a substantial gold cost. The tab begins the same as the natural stash: 7x2, and can be upgraded further, up to a grand total of 210 inventory squares. The total amounts per tab have been calculated during the Diablo III Beta test [1] and are shown in a table below. A little known feature has been in the game since launch, where players can right click on a stash tab and then select from a variety of icons to replace the default

For archival purposes information on the evolution of the stashs' development is preserved below.

We reevaluated average character and account storage space requirements, and found it necessary to ensure we could handle what we anticipate will be a large amount of data very quickly after release.

Diablo III has both the benefit and disadvantage of having completely random items. Pretty much everything can roll up different affixes, if not a range of its benefits. That's obviously great because the item hunt is what it's all about, more randomization means you can keep chasing that perfect item, but that means the amount of data needed to describe an item is much, much larger than say, a World of Warcraft item, which is static and only needs a unique number to identify it.

A Diablo III item first has to say the base item, then each individual affix that it rolled up, then the ranges of each variable, and if it has any sockets. And we have to think about everywhere an item can be, an item on the ground is still an item, and so is an item on the auction house.

We obviously have room to grow if our projections are incorrect, or we just find that we eventually have the space. World of Warcraft definitely grew over the years, and that storage space didn't appear out of nowhere (although it does seem rather magical at times). We find three tabs to be plenty for at least the initial release of the game though. Not counting the items you're wearing (assuming they're the best you have), and assuming worst case scenario of nothing but 2-slot items, you'd be able to hold 405 swords per region. That's a lot. We don't expect people to be storing 405 swords... hopefully ever, because that might indicate you have an obsession with swords, but at the very least there should be enough storage to start and then we can continue to evaluate as we go. 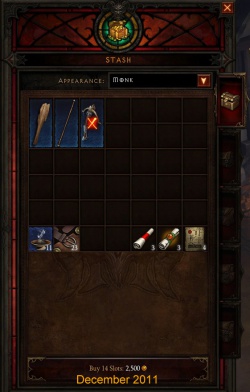 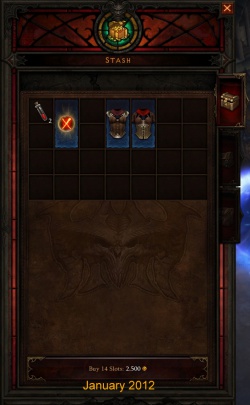 An additional feature, which was a pleasant surprise to some, was the ability to select which class to view the stash as. Selecting a different class made the armor items appear different: each class has their own unique icons for armor. This also disappeared between Beta Patch 9 and Beta Patch 10. In the left image above the 'Appearance' tab can be seen and in the right hand image from January 2012 it has gone.

Shared stashes are confirmed as in the game and working, by an @Diablo tweet. [4]

Shared stashes are in and working.

In Blizzcon 2010's D3 Open Q&A Panel, RichterLocke from DiabloWiki asked if the D3 development team had decided whether or not to implement a shared stash. After some hesitation, Jay Wilson finally confirmed it: "Yes, and that's Blizzcon-exclusive by the way."

Jay Wilson spoke again about the shared stash at Gamescom in August, 2010. [5]

Including a shared stash in Diablo III is, I think, everyone’s first choice. A shared stash is very easy to deal with for the player, and having it in the game creates a nice common area where characters can gather in a game. It does create a few problems, though. For one thing, it really encourages players to [[mule]] items on multiple characters. Which may just be something we have to deal with. Players who like to mule really like doing it. We kind of feel, well, we wish you didn’t have to mule. We wish there was a better way to store away spare items.

Also from Gamescom, Jay described the stash getting larger over the course of the game. [6]

The stash starts off small, but grows “ridiculously huge” over the course of the game, when gold is spent to enlarge it.

"No update, it’s something we hope to do, it’s not designed or in any sort of implementation phase so until we reach that point and either hit a revelation of it working or not we won’t know for sure. But yes, still hope to have some sort of easy way to share between characters. “Drop games are dumb.” - Bashiok"

Finding and collecting items is a big part of the Diablo franchise, but storing and transferring those items has not always been easy. Jay Wilson spoke to this problem in BlizzCast Episode 5, August 2008. [8]

"'''Jay Wilson:''' ...we really want to make it easier for you to be able to share and trade items with other people and other characters on the same account. We’ve talked about ideas like a shared stash, or a mail system like World of Warcraft has, and we haven’t nailed down exactly which one of those we want to do, but we’re definitely going to do something like that, that’s going to make it really easy for you if you’ve got, a Witch Doctor and a Barbarian character, and you find that awesome Witch Doctor drop and you want to share it, it’ll be super-easy to do that."

'''Jay Wilson: '''No, no more opening up a game, dropping items on the ground, and you know, hoping that the game stays open or getting a friend to help out, no more of that. You should be able to do it on your own.