Spectral Blade is used for Wizards willing to meet their enemies toe to toe. It's a powerful melee spell that will kill most enemies early on. 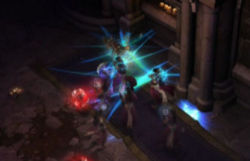 This skill was the default left click attack at the BlizzCon 2008 build, and it worked quite nicely. It was a melee+spell, hitting anything up close with all 3 slashes, but extending the slashes far enough that targets out of melee range would be hit by one or perhaps two of the attacks. Each slash could also strike multiple targets, making this one potentially quite damaging against multiple, close-range enemies.

There is a slight casting delay on Spectral Blade, making it too slow to stun lock enemies. A Wizard who uses this one at the point blank range where it's most effective will be hit back by any targets who do not succumb to the first assault.

Spectral Blade is a magical attack that deals physical damage to enemies very near the Sorceress. The skill creates a lattice of straight lines of power that overlap like a half dozen toothpicks tossed down in a heap. It's got a cool, sword-slashing sound to go with it, and can be seen (and heard) repeatedly in the Wizard game play movies from BlizzCon. The skill hits each enemy in front of the Wizard up to three times, dealing 1-5 damage. 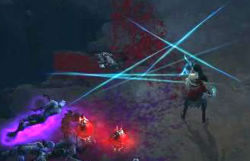 Using this skill is almost like using Bash, or Cleave, or some melee Barbarian attack, if those skills had extra range. Spectral Blade hits enemies at melee range, but can also nail them a yard or two distant, though it seemed like the multiple hits of damage were more likely to occur if the monster was right in front of you, where the lines overlapped. The initial temptation is to use this skill against anything that can be hit by it, but after a bit of practice (and a lot of running out of mana) I realized that it was more effective if I aimed it. So I started letting the monsters get into range, and tried to position myself so that I had several zombies in a bunch, where each slash of the Spectral Blade would have a chance to hit all of them more than once. This immediately cut my mana use since I was using the spell less often, and it was more fun to use it that way. It became a bit of a challenge to try to take out zombies or skeletons in one Spectral Blade, instead of 2 or 3. Especially when I had a couple of them overlapping.

I was not able to use it enough to figure out just what the odds of getting multiple hits were, or if they could all hit even when there were multiple enemies in the target zone, since the damage can vary so much. Spectral Blade can deal 1-5 damage with 1-3 hits, so I could do 1-15 damage with each use of it. Plus, since all 3 hits were added up and dealt at once, there was no way to tell if I'd landed 1, 2, or 3, especially since 3 hits might only do 3 or 4 damage, while a single hit could do 5. Still, it was a fun skill to use, and the multiple hits to multiple targets over a larger-than-melee range made it fun to play with. I enjoyed using it in crowds and watching multiple enemies take hits.

It's not a spell that can be used machine gun style though, even if enemies are in range. There's a short delay after each cast, a cooldown that's longer than the Wizard has with her projectile spells. As a result Spectral Blade doesn't look like a real boss-killer. It also didn't seem to stun or interrupt the attacking motion of monsters, the way melee attacks sometimes did, so it's not a way to render targets helpless while you slash them to bits.

Spectral Blade was first shown at BlizzCon 2008 when the Wizard was unveiled. It's still assumed to be available as of 8 July 2009.