ADVERTISEMENT
From Diablo Wiki
Revision as of 19:59, 15 August 2013 by Flux (talk | contribs) (Created page with "Reaper of Souls is (apparently) the title of the first Diablo 3 Expansion pack. The name was revealed by Blizzard on August 13, 2013, via a teaser image posted on their Diablo...")
(diff) ← Older revision | Latest revision (diff) | Newer revision → (diff)
Jump to: navigation, search

Reaper of Souls is (apparently) the title of the first Diablo 3 Expansion pack. The name was revealed by Blizzard on August 13, 2013, via a teaser image posted on their Diablo 3 website. [1]

The page was not linked from the main page and was not promoted via their twitter or facebook feeds for several days after it went live, leaving fans and media free to speculate and publicize it virally.

Further information about Reaper of Souls is expected at the 2013 Gamescom convention August 21-25, where Blizzard has scheduled a press conference for the first day.[2]

The teaser page went live with just the image seen below. It was not clickable, though past Blizzard game reveals (including Diablo 3) begun with a single static image, which was then updated or modified as the reveal drew closer. Fans have speculated that the doorway in this image will grow brighter, like a dungeon entrance, and be clickable once it goes up as the official site reveal. 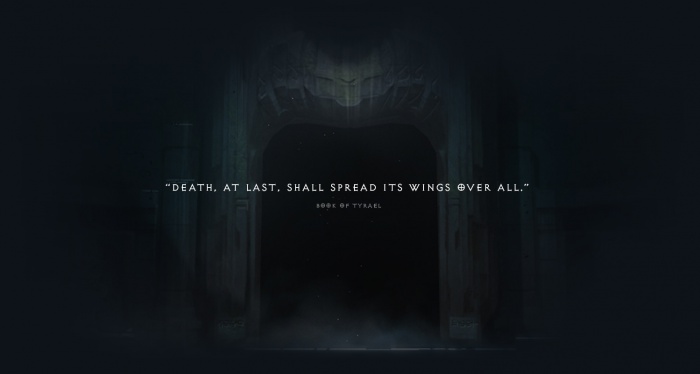 The quotation on the image comes from the Book of Cain, and is part of a longer quatrain:

And, at the End of Days, Wisdom shall be lost
as Justice falls upon the world of men.
Valor shall turn to Wrath-
and all Hope will be swallowed by Despair.
Death, at last, shall spread its wings over all-
as Fate lies shattered forever.

This refers to the Archangels of the Angiris Council, and appears to describe events that unfolded during the story of Diablo 3, with foreshadowing for the story of the expansion.

As seen during Act 4 of Diablo 3, Imperius fought Diablo as the Prime Evil and was defeated and badly wounded, but not killed. After that setback Imperius led the angels in unsuccessful defending the High Heavens against the forces of the Burning Hells, and was overtly hostile to the Nephalem hero (your character), seeming on the verge of attacking before falling unconscious once Diablo reached the summit of the Silver Spire.

While the other Archangels are seen in the epilogue after the hero defeats Diablo the Prime Evil, nothing is known of Imperius' disposition, but from his behavior during Act 4 it doesn't seem likely that he's happy. The above quotation from the Book of Cain surely refers to Imperius with the line, "Valor shall turn to Wrath" and many fans are speculating that he will not rejoin the Heavens but will instead become an enemy of humanity, or perhaps even a corrupted monster, like Izual before him.

Is This the Diablo 3 Expansion?

All signs are that this is the name of the Diablo 3 expansion.

This should be made clear shortly, at the Gamescom press conference on 21 August, 2013.