The Morlu Caster has only been seen in concept art and in the Monk's cinematic movie, so they are known more by potential than by actuality. The monster is definitely a humanoid and is apparently a higher level version of the various Dark Cultist mages. It's assumed that "Morlu" is the monster type, and "Caster" is his role/occupation. We might see "Morlu Warriors" or some other Morlu type units -- or this particular demonic mage might be a one-off who has a fancier name than most. 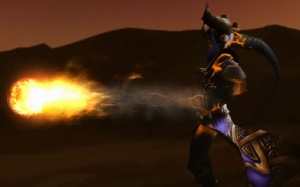 Morlu Casters are unknown in the game, so their behavior can only be predicted by how this one behaves in the Monk cinematic movie. There it launches a Fireball, which seems a very probable skill. Less likely is the ability to leap high into the sky and vanish, leaving behind a barrage of falling Meteor Storm, but such a power is not out of the question for a late game enemy.

That the monster will wear a robed disguise and pretend to be your friend seems highly unlikely, though.

It's assumed that Morlu Casters are the highest level of Cultists, but this remains speculative until more information is released. They associate with melee fighter Cultists in the Monk Cinematic, but only indirectly, and the Morlu Caster's appearance is very stylized and snazzy; not much like the basic mutated human in purple that the other types of Cultist effect. 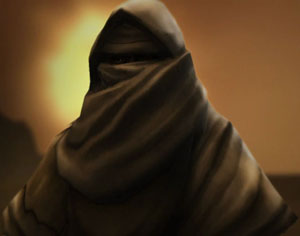 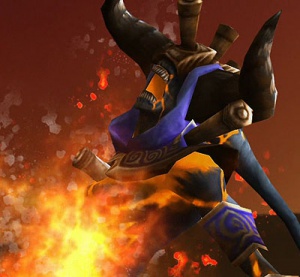 It's not known how much of the Morlu Caster's behavior in the cinematic will show up in the game. He casts a very impressive flying Meteor Strike type spell, as well as demonstrating high defense and a staff-breaking charge attack -- these may all be special effects added just to spice up the Monk's movie, or some/all of them might be abilities the Morlu Caster actually possesses in the game. (Though the staff-breaking strike is surely just for the movie, since D3 weapons don't even have durability, much less the potential to break entirely.)

It's generally assumed that the in-game version of this monster will be just another monster mage, without any of the mini-boss super powers seen in the cinematic.

It's not known if the Morlu Caster seen in the Monk cinematic is a named Super Unique we'll see in the final game, or was just something the movie guys created for the cinematic. In any event, the Morlu Caster's starring role in the Monk's introductory movie earns him some fame, at least.

It's not yet known how closely, if at all, these demonic human mages are related to the other types of Cultists.

There are no screenshots yet, but the Morlu Caster appears all throughout the Monk's Cinematic movie, and is also seen in one piece of concept art.