A Minimap is a small map that shows the player the immediate area around her. It also has graphical representations of important landmarks and geographical features, such as the player's stash, waypoints and others. 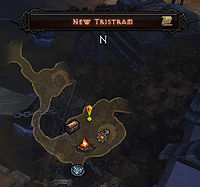 The minimap in Diablo 3, showing landmarks and topography.

In the GamesCom 2009 gameplay video, the minimap can be clearly seen in the top right corner, it is much smaller than the one in Diablo 2. It is unknown if it can be edited by some options like the map in Diablo 2, which could be made transparent, opaque, smaller or larger to a certain degree.

As would be expected, the minimap has gotten some upgrades since Diablo II, both in aesthetic and function.

The new minimap resides in the top-right corner, and it shows icons for important landmarks. Current speculation says that the chest icon is for the stash, and that the icon near the bottom of the map in the picture provided is a waypoint. The circular, spiky arrow on the map is the player-character and their current position, including which direction they are facing. The function of the campfire, and thus its icon, is open for speculation as Blizzard has not released information about it yet. The yellow exclamation mark represents the location of a quest-giver.

Since the outdoor maps are static, this allows the Diablo III development team to be a bit more intricate in the minimap designs. The terrain is even featured, as is shown by the lighter crescent-shapes on the minimap, denoting raised terrain. An ornate brown box above the minimap lists the current location of the player-character. 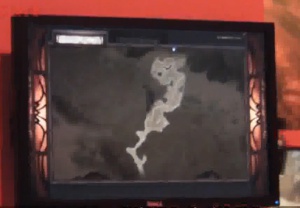 The map overlay in D3, as seen in the Gamescom 09 demo.

In addition to the minimap, there is also an overlay in Diablo III but it appears to have changed in function from Diablo II.

It is presumed that the overlay map is accessed by clicking the scroll icon in the bar above the minimap.
The overlay is transparent, but it is also framed on each side with bars of either black or stained glass. The map can be dragged around in order to see the ground you've already covered, similarly to how the arrow keys worked for the overlay map in Diablo II. It does not appear that the character can be moved nor skills or spells casted while the overlay map is up.

Diablo 2 had a large transparent minimap, that covered the centre of the screen. It showed the player various important places, such as Waypoints, Shrines and caves. In addition to the transparent overlay, there was also an option to have the minimap condensed and situated in the upper-corner of the screen. This way, the minimap took up less space on the screen, but the map itself (which was designed to be used as an overlay) became slightly "crushed" and could be hard to read in certain areas.

The game offered options for user control, including location of the minimap, level of opacity, and also the option to have the immediate area surrounding the player be completely opaque for the overlay, which would obfuscate less of the game field.