Difference between revisions of "Khazra"

Goatmen are simple demonic creations that attack in great numbers. The name "goatman" is a colloquial name, and their original name is Khazra. The demonic specification of Goatmen is that they are Animals.

The only type of goatman yet named in Diablo III are Moon Clan Warriors, but it's certain there will be various clans of Goatmen, as there were in Diablo I and Diablo II. 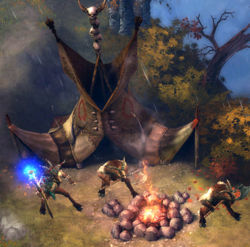 Goatman camp.
The goatmen foot soldiers seen thus far are much as they were in Diablo II. They mill around in medium-sized packs, wielding huge two-handed polearms, and attack quickly, but not very effectively. The D3 goatmen have quick footspeed and a fast swing, but they pause for a long time between attacks. Their death sounds seem to be improved over how they were in D2, though they're not quite as delightfully bleaty and goaty as they were in D1, when their enticing noises put them amongst everyone's favorite monsters to kill.

Goatmen Shaman are a new type of goatman in D3, though it's not yet known what types of buffs or resurrection spells they might possess.

Goatmen are now found in camps, and in the WWI 2008 gameplay movie a vast mob of them comes running out from behind a tent like the one pictured to the left.

The umbaru Witch Doctors of lower Teganze started to rid the jungles of the Khazra, and in a truly legendary battle they defeated Zagraal. Without demonic powers, the goatmen became weak, and besides power surge that came with Diablo's emergence in Tristram some 20 years ago, they have been the sluggish and muddled beings we know today.

Vischar Orous, Chief Librarian and Zharesh Covenant of the Brotherhood of the Vizjerei classified goatmen as Aries Vehemens[1], lieutenants of Baal bred for strength, endurance, and cunning. Apparently spending a lot of time in Hell, excercising in mock wars to please their masters. The different clans of goatmen was according to Vischar blessed with gifts from Baal. If this was the beliefs of Vischar, or if the Vizjerei just needed to cover up the horrible truth is unknown. [It's also possible that this is just a retcon from Blizzard].

Some of the history of Goatmen (Khazra) is detailed in the Writings of Abd al-Hazir. They are especially named in entry no 9. 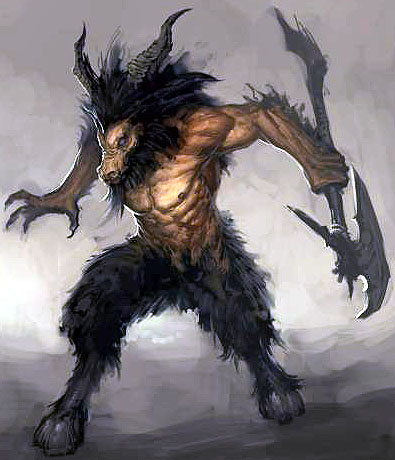