Inferno is the name of the highest difficulty level in Diablo III. While Diablo I and Diablo II offered only Normal, Nightmare, and then Hell for replayability with increasing difficulty, Diablo III added Inferno, a fourth difficulty level that offered much greater challenge than did the hardest parts of Diablo II. 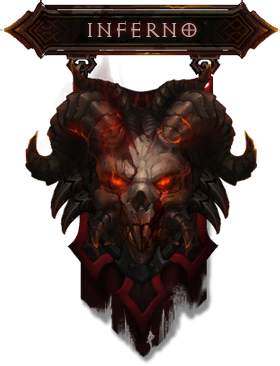 Players must venture into Inferno in order to find the best items in the game, but most players find that they require those items to survive in Inferno in the first place, which can make gearing up to succeed in Inferno quite difficult, especially without using the Auction House.

Several game features only become available once a character reaches level 60 and/or enters Inferno. Refer to the Paragon System and Nephalem Valor articles for more details.

The difficulty and balance of Inferno has changed repeatedly since Diablo III's release, and will surely continue to be tweaked in future patches.

Players were initial quite positive about the prospect of a truly-challenging difficulty level, and many players constantly urged the developers to make it harder. They did, and ironically the player consensus soon became that Inferno was too hard. The main complaint that was Inferno was a "gear check" that made advancing through Inferno all but impossible without extensive use of the Auction House to obtain better gear.

Jay Wilson: Internally we have this super hardcore test team that tested Inferno and we got to the point where they thought it was challenging enough and then we doubled it because we knew that no matter how good we are, our players are going to be better.

As a result of the initial Inferno difficulty, Blizzard made substantial nerfs to Inferno in various patches, chiefly v1.0.4 and v1.0.5. Patch 1.0.5 also introduced the Monster Power system so expert players could turn the difficulty back up for themselves, to add challenge and greater rewards over the (lowered) regularly difficulty.

The developers' intentions for Inferno was not just to tack on a harder fourth difficulty, but to create much more variety in the end game play. Diablo I and Diablo II were typified by players doing endless "runs" of the same monster or area; whatever was most profitable was what players spent time playing, regardless of the enjoyment to be found there.

Bashiok commented on the issue of Inferno and the end game after its Gamescom 2011 reveal[1]:

The general philosophy [of end game] is that we want to make finding better loot at the end game more enjoyable, and attempt to address 'path of least resistance' style gameplay.

There's a couple ways we're doing that, some of which we're not talking about just yet.

Primarily it's focused around Inferno and creating a consistent difficulty across the entire act. By having a flat difficulty across the entire game in Inferno it evens things out so that no matter where you want to go you're being challenged, and you have a good chance at getting good drops. That's intended to open the game up so there's simply more freedom for the player to go anywhere in the game and have an equal chance at good drops.

There will probably still be a slight difficulty curve in Inferno, as enemies simply become more complex and have greater abilities later in the game, but we're making an effort to make it as even across the board as possible. It's something we'll very likely have to keep tweaking after release.

In addition we're attempting to de-emphasize path of least resistance by creating a more equal value across monster types. We're not going to get into specifics about who can drop what or how much, but our intent is that being out in the world exploring should be as lucrative (potentially more) as simply aiming for the quickest-to-reach boss and running that over and over.

Getting people out into the world of the game and away from repetitive boss runs is essentially our goal. It's going to be tough because people will find a path of least resistance, and they will make that the game. We're going to have to keep on top of it, and truthfully it's something we're still working on. We'll likely want to have some additional features to support these ideals, but just getting Inferno tuned right is our current end-game goal for ship.

And also later followed up this initial post with a few other elaborations:

I don't think it's ultimately what we want for the end game either, but it's a great start, and we think plenty to keep people engaged for the initial release.

If we believe it will make their play experience more enjoyable or rewarding, absolutely.

The problem is people do boss runs over, and over, and over, for years, and it's not because the boss run is fun, it's because it's the path of least resistance to finding an awesome item. No one wants to do repetitive boss runs.

If we can instead say the path of least resistance is the entire game, that there's no single boss you have to repetitively farm to get the most items per hour, then the game is better for it and the players are liberated. They now have options to go anywhere they want to look for items. Hitting that perfect balance is probably near impossible, but we think we can get pretty close.

This largely worked in practice, with players finding the best items by playing through long stretches of the game, rather than simply running bosses. There were still some areas with more/better loot, or more monsters, but compared to Diablo II, the end game of Diablo III is hugely more varied.

This theory was reinforced in Patch 1.0.5 with the introduction of the Infernal Machine event, which requires players to farm ingredients throughout the entire game, in order to enable the newly-added bonus event.

Inferno difficulty was revealed in a video at Gamescom 2011. Watch it below, courtesy of the DiabloInc YouTube channel.

The early feature set was as follows:[2]:

Several of these features were changed before or after release, with the concept of a flat difficulty level across all of Inferno one of the first to go.

Inferno was the name of a fire spell in Diablo I and was a Sorceress skill in Diablo II. In those games Inferno worked like a flamethrower, emitting a targetable spray of flame that drained the mana steadily. Inferno did not return as a Wizard skill in Diablo III, though various monsters and objects do emit Inferno-like sprays of flame.

The spell type has become so well known through Diablo and other games that other spells with a similar range/effect are often referred to as "inferno-like" spells.