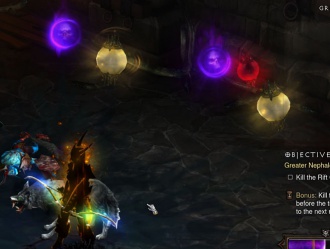 Health Globes or Health Orbs are red, floating globes of life energy that "drop" from slain monsters or fall from Bosses at set intervals of their life (usually 25/50/75%). Health globes are "used" when a character passes through or near one, and instantly refill 15% of a character's maximum hit points. All characters in the party in the immediate area also enjoy the life gain.

Health globes are the main source of life replenishment in Diablo III, along with health potions and various healing properties from items or skills. Health Globes are also featured in many skill and item procs, and will grant various bonuses along with their healing effect. (Such as Reaper's Wraps bracers refilling 25-30% of a character's resource when a health globe is consumed.)

Players may also see also yellow Nephalem Orbs anywhere in the game, and purple Progress Orbs only in Greater Rifts.

Health gain varies with the type of health globe, but it is always some percentage of a character's maximum hit points, instantly refilled. (Initially health globes filled in gradually over 3 seconds.)

The chances for a health orb to drop vary by monster type. These odds may be increased by special bonuses on some skills and items.

Health globes only add hit points up to a character's maximum life and provide no benefit or bonus above that level. A health globe has no healing effect when used by a character with full health, though if a character has a proc triggere by the health orb that will still function even at full health. Since health orbs are shared throughout the party in close proximity, a full health character can heal a low health party member by hitting a health orb nearby.

Each health orb is consumed completely when used, vanishing from the world. Health orbs cannot be moved; rather, they simply float where they spawned. If no player uses one, however, they will remain floating there for some time, and can be returned to for a later health boost. Players often save them by avoiding them and leaving them behind, if they need to return for healing or more often for a resource fill (such as Demon Hunters using the Blood Vengeance passive. Health orbs come in two sizes, though it can be difficulty to discern between them without zooming in on the view. This is most easily seen with the comical, cupcake-graphic for health orbs dropped by the cute monsters found in Whimsyshire (or sometimes in other tilesets in Rifts.)

Patch 2.1.0 released in August 2014 implemented major changes to how health and vitality worked in Diablo 3, and adjusted the value of Health Orbs as well. Vitality was made to grant larger amounts of hit points, the healing from health orbs was reduced, Life on Hit was reworked, various other healing skills were tweaked, and life regeneration was greatly increased. From the Patch 2.1.0 notes:[2] 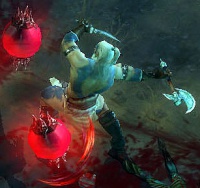 In Diablo III the goal is for a more consistently challenging play experience, and for players to have to stick it out in battles to earn a health globe, rather than just popping back to town. Jay Wilson spoke about this design philosophy in an interview from Blizzcon 2009. [3]

During development there were hints of more powerful types of health orbs, but these did not make it into the final game.[4]

Boss monsters drop health orbs at intervals, to give players a way to sustain the battle. This was part of the developers' plans from the earliest days. Jay Wilson commented on this in 2009, [5] "[bosses] would drop health globes at percentages of their health. Rares in particular are almost guaranteed to drop about every 25%." 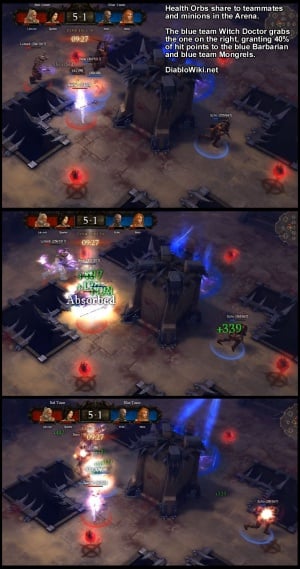 During testing of the PvP Arena at Blizzcon demos in 2010, health orbs appeared in pre-set points every 30 seconds after the start of a round. They never appeared when players died.

Health orbs grabbed in the arena grant their full benefit (at that time, 40% of max hit points) to all nearby members of the team, as well healing pets. This dynamic can be seen in the three-shot series to the right, where the blue team Witch Doctor gets an orb that grants a health bonus to his Mongrels, as well as the blue team Barbarian.

This changed further in early 2010, when the Wizard's new resource, Instability was revealed. [7] This resource, later changed to Arcane Power, was not affected by health globes. The Witch Doctor, on the other hand, continued to gain mana from health globes.

All classes can gain resource with each health globe when using the Reaper's Wraps bracers.