Difference between revisions of "Hands of Lightning (Skill)"

Hands of Lightning is a Tier 1 skill, which requires a clvl of 2. This is one of two combo skills available to the monk in the first tier. Combo skills generate spirit.
The Monk charges his strikes with lightning in a three-stage attack. 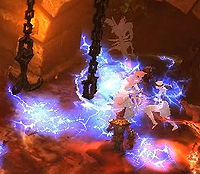 This skill first appeared at BlizzCon 2010. As it is a first tier spell, it was playable in the demo.