Difference between revisions of "Greyhollow Island" 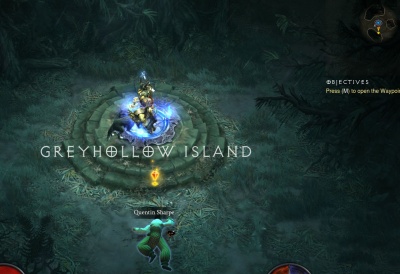 Greyhollow Island is a new zone that was added to Diablo III in Patch 2.4, January 2016. It it an outdoor area, set in the northern forests with dense groves of evergreen trees. The "island" nature of the zone is expressed in rocky cliffs and occasional views down to a turbulent ocean, including rotting piers and narrow, haphazardly-constructed bridges over gorges and fjords.

There are no "new" monsters in Greyhollow Island, but all the existing enemies seen there are reskinned or modified in various ways, giving them an appropriately wild, savage, icy northern feel. They are almost entirely non-humanoid enemies, including wolves, savage trees, wickermen, giant insects, yetis, and other examples of nature run amok.

Greyhollow Island is an area reached via the waypoint map in Act III, and it is seen only in Adventure Mode, not in the Campaign Mode. The tileset can also be seen randomized in Nephalem and Greater Rifts, where it is usually a largish area with fairly high monster density.

Blizzard spun lore and shared creative notes about this area in a Patch 2.4 preview article posted in early January, 2016.[1]

Miles off the coast of Westmarch lies an island that many believe to be little more than legend. Cut off from the rest of Sanctuary’s developed civilizations, Greyhollow was once the center of a grand empire. Often times, such isolated societies grow and advance at incredible rates, and Greyhollow was no different. Its citizens devoted their cause to a mysterious and, as is often the case in Sanctuary, completely evil being. For reasons still unknown to this day, this unimaginably advanced society collapsed, leaving ruin, chaos, and a lingering curse behind.

Over the years, inquisitive adventurers would catch glimpses of this land off in the distance, though many presumed it to be an illusion, perhaps even a trap devised by the many evils that inhabit the world. Those who found their curiosity insatiable attempted to travel to and explore the land, dreaming of notoriety or wealth. Instead, each journey ended in tragedy, as those foolish enough to pursue this myth were never to be seen again.

Blizzard also shared some details on their design goals for Greyhollow Island.[2]

The enigma behind the events of Greyhollow Island took careful crafting, and several themes were at play. There’s an overall creepy ambiance to this thoroughly supernatural slice of nature, and we wanted to make sure that vibe was prevalent in each aspect of the zone, extending from art and visuals to gameplay and creature design.

Putting this island forest together came quickly and fiercely, as our artists and designers were so eager to breathe reality into this zone that ideation and conception were completed more organically than traditionally. This means that few sketches or style guides were needed; Greyhollow was so clear and composed that it took little effort to jump straight into producing its components in our tools.

It became clear that to deliver the man-versus-nature feeling, it was necessary to avoid as many humanoid creatures as possible. Senior Game Designer Joe Shely explains this conscious decision in a succinct way: “Greyhollow Island is about being alone in the woods at night. It’s an untamed island filled with natural and supernatural dangers.” The monsters of the island reflect this, with natural enemies like the Primeval Hunter and Glowing Death to the more fantastical Hive Mother and Silverback.

Inspiration for the zone came from a variety of places, but Technical Artist Neal Wojahn’s personal experience of the Pacific Northwest played a key role in bringing the deadly marine elements to bear. Born and raised in the region, Neal recalls a section of coastline called “The Graveyard of the Pacific,” an area known for a higher number of shipwrecks than anywhere else in the ocean.

“Greyhollow is supposed to be set in a similarly treacherous area. As a child, I have vivid memories of driving with my family to the Oregon coast and seeing shipwrecks sinking out into the sand, being beaten by the grey fury of nature.”

These notes are visible all over Greyhollow Island, and it takes only a moment of observing the crash of the waves or churn of the ocean to feel the raw power of the elements that the team wished to convey.