Goatmen are simple demonic creations that attack in great numbers. The name "goatman" is a colloquial name, and their original name is Khazra. The demonic specification of Goatmen is that they are Beasts.

See also Malformed for the Goatmen that appeat in Act 3. 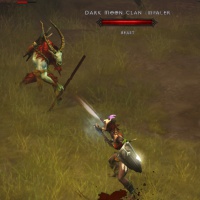 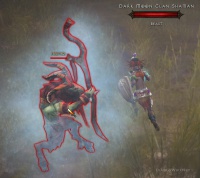 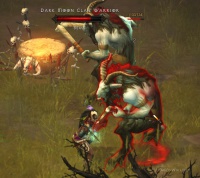 These superunique Khazra can be found in the following locations:

The umbaru Witch Doctors of lower Teganze started to rid the jungles of the Khazra, and in a truly legendary battle they defeated Zagraal. Without demonic powers, the goatmen became weak, and besides the power surge that came with Diablo's emergence in Tristram some 20 years ago, they have been the sluggish and muddled beings we know today.

Vischar Orous, Chief Librarian and Zharesh Covenant of the Brotherhood of the Vizjerei classified goatmen as Aries Vehemens[1], lieutenants of Baal bred for strength, endurance, and cunning. Apparently spending a lot of time in Hell, exercising in mock wars to please their masters. According to Vischar, the different clans of goatmen were blessed with gifts from Baal. If this was the belief of Vischar, or if the Vizjerei just needed to cover up the horrible truth is unknown. (It's also possible that this is just a retcon from Blizzard).

Some time ago, I revealed that the khazra, or "goatmen," were originally humans until the Vizjerei corrupted them. For many years these creatures were simple and lethargic. These days have ended. Khazra attacks are widely reported and the number of fatalities is higher than anything in my records...

The ninth journal entry of the Writings of Abd al-Hazir.

The khazra (colloquially known as "goatmen") were long thought to be natural inhabitants of our world, akin to the lacuni "panther-men" tribes of the desert and mountain regions, but I have recently discovered evidence revealing that nothing could be further from the truth. The history of the khazra is much more complex and disturbing than has been previously imagined. 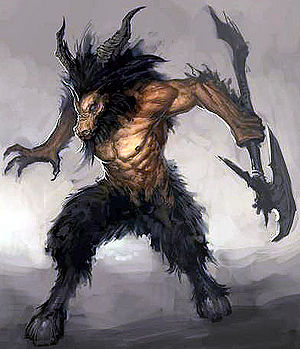 Khazra artwork.
According to ancient carvings that I have succeeded in translating, the khazra were originally human, part of the Umbaru race found in the thick Torajan jungles in the Teganze region of the eastern continent. At some point in the distant past, the five clans that would come to be known as the khazra migrated to higher elevations and began developing along different lines than the clansmen they left behind. They lived in relative peace and began the transition from a hunter-gatherer society to a farming one. This state of affairs changed dramatically when they encountered the Vizjerei about two thousand years ago (if my translations prove to be correct).

This was the height of the Mage Clan Wars, and even the mighty Vizjerei mage clan was showing signs of stress brought about by the prolonged struggle. A faction of the Vizjerei resolved to construct an army using demon-possessed victims, and the peaceful Umbaru clans seemed to fit the Vizjerei's needs. It is unknown how the clans first came into contact with the Vizjerei, but within the span of a decade or so, some of the future khazra clans had turned from their peaceful existence to all-out warfare with the Vizjerei. This was surely the result of seeing their brothers being painfully transformed into savage goat-like creatures by the Vizjerei.

Though they were primitive by the standards of the Vizjerei, the umbaru clans held the powerful mages at bay through familiarity with the terrain and sheer ferocity. But this state of affairs could not hold forever. As decades of savage warfare took their toll on the umbaru's culture and minds, the clans began to search for any means to prevail over their enemies. In fact, they lost sight of anything else.

Exact details on what transpired next are scarce, but I have ascertained that at some point during the next two hundred years they decided to use the Vizjerei's strength against them. To this end, the clans actively sought to capture a mage to do their bidding. Eventually they succeeded in violently coercing one of their captives to help them not only gain control over their transformed clan mates, but to have themselves transformed as well in order to fully drive the Vizjerei out of the Teganze.

Their strategy worked, but it was not without its price. They found themselves bound in servitude to the demon Zagraal in exchange for their cursed power (note that I neither endorse nor dismiss theories of a "Burning Hell" by the use of the term demon; it is simply used here in its original intent: to describe a being of malevolent or loathsome origin). They became furious marauders, driven to raid villages and caravans to sate their bloodlust and procure sacrificial victims for their demonic master. This is also when they became known as khazra, which roughly translates as "demon" or "devil" in the umbaru tongue.

After years of this terror, their previous brothers, the Umbaru of the lower Teganze, sent their sacred witch doctor warriors to eradicate the khazra's threat to the region. Filled with otherworldly power, the witch doctors cut a swath of destruction through the khazra until they confronted Zagraal himself. In a now-legendary battle, the valiant heroes fought to the last man before finally bringing Zagraal down.

The khazra continued to wage war on humanity, but without a source of demonic power to draw from, they became weak. Despite a slight unexplained resurgence twenty or so years ago, their fury steadily drained from them until they became the sluggish and muddled beings we know today.

Addendum: While researching the various hostile wildlife that adventurers regularly encounter in their work, I have been informed that the khazra have regained some of their lost vim and vigor and are once again ferociously attacking humans. As of this writing, such reports remain uncorroborated by reliable sources.