The DnD Adventure Game: Diablo II Edition (sometimes known as The Bloodstone Tomb, after it's content) is a DnD stand-alone tabletop adventure game similar to the standard version of the DnD "basic" adventure game, but with a Diablo II twist. It was released in 2000 and authored by Bill Slavicsek and Jeff Grubb. 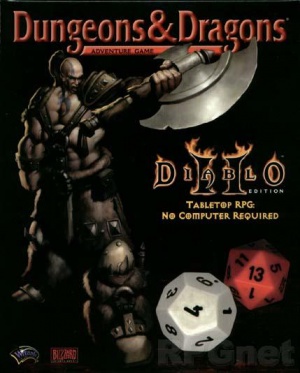 The cover of the box

This adventure is not exactly a PnP RPG, but rather a very simplified version that is made for younger players, to introduce them to the more advanced DnD rules. This version is of course made to attract Diablo II fans into the DnD world.

This box contain rules, quests, pre-printed heroes (Amazon, Barbarian, Paladin and Sorceress) and dices to play from the minute the box is opened. The game can also be downloaded for free from Wizards of the Coast's homepage, if you have the dices yourself [1].

The validity of the lore in this module - whether or not is canon - is unknown. Blizzard have said all previous official sources of information are canon with the exceptions of any retcons.

On a side note, Jeff Grubb is a long time DnD writer veteran (30+ years), and Bill Slavicsek have done quite a bit for the DnD franchise himself. 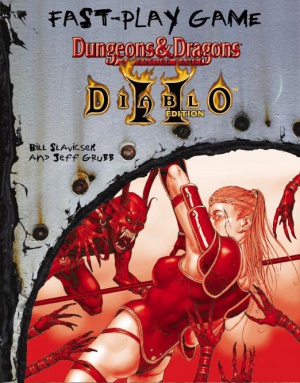 The free manual. All you need to play!

While the description says it's part of the third edition D&D, it's more likely part of the AD&D 2nd Edition, as references in the material suggests the older set of books and rules are the model for the game rules.