Template:Class navbox The Wizard's skills are divided into three skill trees, each of which has about 18 known spells. These were first seen at Blizzcon 2008, and while they are very much subject to change during the game's continued development, viewing them in this state is still informative. The three trees are:

All active skills in the BlizzCon build were capped at 1 skill point (or rank, as skill levels are called in D3), while most passives went up to 15 points. This will not be the case in the final game; active skills will allow more than 1 point, and passives may have different maximum ranks, to allow better game balancing. Know that skills will be modified, that some will be removed, that others will be added, and that the numbers are almost certain to change.

Skill Runes could only be socketed in active skills, in the Blizzcon build. This may or may not remain true in the final game.

These skills are available for use as soon as new Wizard is created.

This mastery boosts the arcane spell damages by a much higher % than similar masteries for other types of damage, and it's unclear why. Possibilities include: arcane spells generally do less damage, their critical hit bonus might be less useful, or the spell just might be overpowered in this early, still-under-testing build.

It looks like a Wizard will be able to greatly customize his or her spells in D3, with passive skills that cut mana cost, increase casting speed, and boost individual damage types. It's not yet known how much equipment will overlap with these abilities; a spell to boost casting speed wouldn't be much good in D2, with so many items that could convey the same bonus.

Another of the highly-useful passive skills possessed by the Wizard. Sort of a full time Lower Resistance aura, that seems to work with all types of magic.

There is no "points in the tree" requirement to start using second tier skills.

A laser beam of molten pwnage, Disintegrate would be at its full effect when taking down line formations of enemies. It'll cut through targets without mercy; however, each target will decrease the rest of the beam's damage by 80%, allowing the beam to reach through a total of five creatures before its damage is fully mitigated.

Damage ticks every second of use, and critical strikes (as with any Arcane Spell) will silence the target for 4 seconds. In the screenshot to the left, you can see an example of Disintegrate being used to take down the structural bearings of a wall, crushing the unfortunate skeletons in its path.

In the Blizzcon demo build, this spell wasn't very useful against large enemies, but was devastating against smaller enemies, especially ranged attackers such as Skeletal Archers. The disintegrate ray hits anything on the screen more or less instantaneously, so nothing is out of reach and there's no delay between clicking the mouse and hitting the enemy with the spell. This one will surely be nerfed somewhat before the final game. 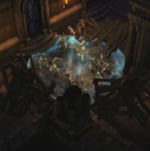 Wave of Force is seen two times in the Wizard Trailer released at Blizzcon 2008. The first is used in a room of skeletons -- it does little damage to the skeletons, but blasts all the destructibles in the room to glorious pieces. In the second example, the Wizard uses it while slowing down time, waiting for a group of skeletons' projectiles to come close, and then reflecting them back toward them.

It's hard to know how many scenarios in a fast-paced game like this where you could really benefit from using Slow Time and then Wave of Force to repel projectiles -- Out of the 8 projectiles in the above screenshot, only one or two actually came back to strike their targets. It will be interesting to see what practical uses there are for this spell as more gameplay videos unfold.

Another interesting mastery; this one boosts the wizard's total armor bonus, but only while one (or more) of the other protective spells are active.

This would presumably stack with other passives that increase the damage and critical hit % of individual spell types, or all spells in general. Bang.

Arcane spell damage seems to be limited by a cooldown time on most of the spells, hence this spell.

The wizard must spend 10 points in the first two tiers of this tree before he may add points to any spells in Tier 3.

A glowing orb of energy travels about 10 yards, before bursting in a nova of destruction. The spell looks something like the D2 Sorc's Frozen Orb, but without the spray of ice spears as it flies across the room. The spell only allowed one point in the BlizzCon demo, but the final game will surely allow more than 1 level (rank) to be added to it.

Sequence of Arcane Orb, cast from within the protective bubble created by a Slow Time spell.

Slow time creates a bubble that surrounds the Wizard. Any enemies or enemy projectiles that enter the bubble are greatly slowed. The wizard, her spell projectiles, and her allies are not affected by the slow time bubble, giving them a huge advantage over the greatly slowed enemies. The bubble remains where it was cast, persisting for several seconds, but the Wizard can move as soon as the spell is cast, though if she moves outside the bubble monster may again target her without their shots or attacks being slowed.

There are a lot of interesting ways to slow or freeze or stun monsters in D3. Types of damage, critical hits, spells, masteries to spells, and more.

No mana globes were dropping during the Blizzcon 2008 demo. It's not clear if they were not enabled, if they don't drop early in the game, or if they never drop at all, unless this spell (or others with a similar effect, or perhaps the bonus comes from equipment as well?) is active.

Boosts the number and damage of magic missiles. It's not known how this spell interacts with the basic magic missile spell. That one seems to set the base damage, which this one enhances.

A wizard must invest 15 points into the Arcane skill tree before he may put points into any skills in this tier.

An interesting variation on spell shields. Rather than absorbing X amount of damage, or some % of damage, this one takes out 100% of the damage, but only works every 6 seconds.

Teleport has been modified somewhat in D3. Rather than blinking instantly between locations, the Wizard leaps several yards straight up into the air, then falls back down when she arrives at her target point. This makes the movement considerably slower, though it's still very fast.

In one of the BlizzCon 2008 panels, Teleport was demonstrated with a striking skill rune socketed in it, and the spell added damage to all monsters in the area, each time the Wizard teleported. Socketing in a multiplestrike skill rune will instead cause the wizard to split into images of herself when teleporting, making the skill useful to distract monsters.

Another creative spell. This one basically lets the Wizard deal substantial extra damage, but with just one spell, once in a while. A wizard who invested in this spell woulc have to modify her play style considerably; trying to use spells sparingly to remain full of mana, in order to score the huge damage hit possible with points in this skill.

A mysterious, all purpose skill description for this one. It sounds like it exists only in concept at this point, and hasn't been balanced at all, yet.