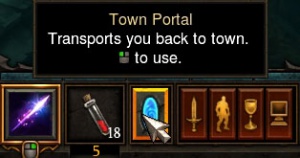 Town Portal on the interface.

The Town Portal returns in Diablo 3 (after numerous changes during development), with a slightly different function than it had in previous games.

The portal is now cast directly from a button on the belt interface; no scrolls or other reagents are required. There is no longer a portal cast in the dungeon; the character is transported directly to town, after a five second casting delay. If the character moves, casts another spell, or is damaged by attack during that time, the casting animation is cancelled; these features are designed to keep players from using Town Portal as an easy escape from danger.

The familiar blue Town Portal only appears in town, and players can run into their own portal (but not one from another player) to return directly to the spot they departed from. Town Portals are no longer required to move from town to the location of other players in the dungeon, since the in-game Banner system fills that function.

The Stone of Recall tooltip.

Diablo 3 initially featured town portal scrolls much the same as those in Diablo 1 and Diablo 2. During early development, the D3 Team decided that this feature was too easily exploited as an escape from danger, and removed it. Jay Wilson explained this decision in a 2010 interview.. [1]

Town Portals are gone. We found them to be a crippling combat exploit. We found that while they had some cooperative uses, they tended to split players up a lot. As soon as players wanted to go back to town they did, and then they had to figure out how to get back to their party. We don’t want players to ever be split up. But the big thing is that Town Portals were a combat exploit. When players can essentially portal out of any situation, it makes it almost impossible for the designers to create a game that’s challenging and compelling, or a world that you’re really immersed in. To replace the need for town portals we’ve added salvaging and we have a couple of other systems that we haven’t shown yet that help with that. The goal is for you to not really miss them.

Those other features remained in, but eventually the need for a speedy way to return to town became too pressing to ignore, and in 2011 the developers revealed that the Town Portal function was returning to the game in a new form. [3] 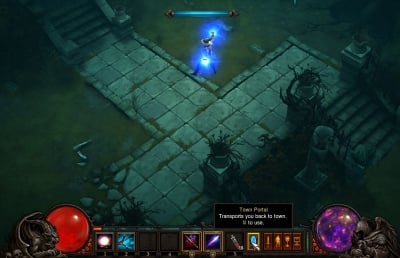 A Wizard returning to Tristram. 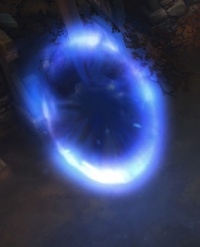 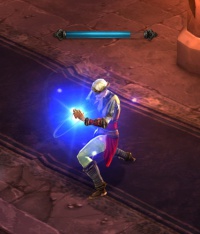 A monk casts a portal back to town
The Town Portal spell seems to be closely related to the Horadric Waypoint network, and work with similar magical components to the Teleport spell, however, it does not seem to require the same type of physical component as the runed stone of a Waypoint. The Brotherhood constructed numerous magical gateways between their mighty fortresses and settlements so that they could quickly concentrate their defences against any incursion by the Demons. With but a thought, the Crusaders of the Light could transport themselves to predetermined destinations many leagues apart.

Although the secret of creating these gateways as well as the Waypoints has been long lost, it is still possible to use the pathways that are already in place. A Portal opened by means of this spell will always take the caster to the location of the nearest gate and remain open long enough to bring the caster back to his point of origin. The Tristram Cathedral is built upon the remains of a Horadrim monastery, and has at least in the past harbored a portal gateway nearby.