PvP, or Player versus Player is head-to-head mortal combat, pitting players against other players. The design focus of Diablo III's multiplayer is on PvE cooperative play, but PvP is supported and was introduced with Patch 1.0.7. 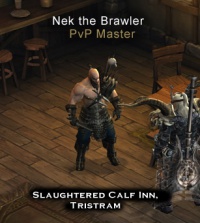 To brawl with other players, speak with Nek the Brawler, who is located near the followers in each act. Speaking with Nek will take the players to the Scorched Chapel, a zone designed specifically for PvP. It has custom geometry and its environmental features can be used in combat.

Brawling currently supports up to four players in a Free-For-All format, which means players can battle their friends either one-on-one, three-player FFA, or a full four-player FFA. If a player dies in the brawling world, they can either be resurrected by another player or they can respawn to a random location in the Scorched Chapel. Death is not permanent in the brawling zone, even for Hardcore characters. There is no durability damage to items while in the brawling zone. When brawling is over, players take a portal out or use a Town Portal to return to town.

The game does not keep score and there are no objectives. However, a player's death is announced using yellow text in the chat log, which tells who died and who killed them. The system is inchoate and there is no official scoring or ladder system, but there are third party websites that provide rankings such as Diablo3Ladders.Com. A public game search option became available with patch 1.0.8. It is not known if there will be any achievements awarded for PvP in the future. Balancing is expected to be finished with the release of patch 1.1.0.

It was originally planned that Diablo III would ship with PvP but as time crept on Blizzard took the decision to launch without as the PvP element was not meeting their expectations and to get it right would have delayed the release of Diablo III further. They felt it could launch without PvP. [1]

In terms of PvP, we didn't feel like the system we had at the time we launched Diablo III was up to par, so we elected not to release it along side the actual game. We continuing to work on PvP, though, and are currently looking to release it with 1.1.0 as a free content update (as we've said before). We also hope to share more updates in the near future on its progress.

So far our plans are to add PvP to the game with patch 1.1, and I am fairly sure we will have much more details on this to share with you as we get closer to release :-)

And when it does launch, Blizzard have confirmed there will be no PvP specific gear, found or crafted [3]

There is no specific PVP gear, only gear good for PVP depending on your build.

In December of 2012 Blizzard announced that the PvP element of Diablo III had been simplified with the Battle Arena aspect of the game going to back to the drawing board.[4] A more simplified version of PvP was promised for Patch 1.0.7. [5]

Unlike in Diablo II, there will not be any non-consensual PvP in Diablo III; there is no more "hostile switch" or any other way to duel or PK in a normal game. PvP will be supported only in special dueling Arena games.

Jay Wilson: We'd like there to be a dedicated PvP mode, and we'd like to move away from [how it worked in previous Diablo games] where players just enabled PvP. We don't have any specific plans yet because we haven't really made any active decisions. The only real PvP-oriented decision that we've made and announced is that we do not allow the hostility mode that Diablo II had where you can go into town, go hostile, pop back through a town portal, and insta-kill your friend. That just makes people not want to play the game. I know some people say, "Oh, you're taking the teeth out of Diablo." I understand why they feel that way, but making people not want to play together does not make for a better game. That's our feeling.

We definitely want there to be a PvP mode for PvP players, and we would like that mode to be a really serious, skill-based, very strong [aspect of the game]. I feel that on the side of all our games, we really try to make PvP games that cater to a competitive player, first and foremost. We don't try to dumb down or tone down our PvP games. We make [them] good, strong competitive games. StarCraft is one of the best examples. But in terms of what our actual plans are for Diablo III, we don't have anything to specifically announce right now, mostly because we're still messing around with a bunch of different ideas.

The philosophy isn't as much to remove pvp as it is to compartmentalize it into a specific dueling arena. The development team, as shown above, views PK'ing as another form of griefing, particularly with the implication of exploits such as tppk.

Spurred by a fan who asked if Blizzard could leave the PvP out of Diablo 3 at launch, and patch it in later in order to release the game more quickly, Diablo 3 Community Manager Bashiok explained why that's not an option and why PvP doesn't add much time to the overall development. Here's his quote, from May 2010. [7]

The PvP game is being developed alongside everything else, so it’s not as if the game is done and we’re ready to ship it but then stop and take a few months to balance things. Also, it’s to be expected that the game won’t be and won’t really need to be balanced right at release as it will take some time for people to really explore and begin reaching competition levels where more extreme balance is necessary or even possible for us to properly evaluate and react to.

Diablo III did not ship with a Player Vs. Player game mode.