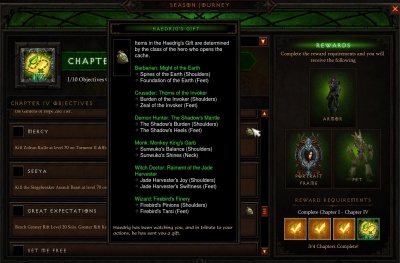 Haedrig's Gift is a bonus Item Set feature added to the game in Patch 2.4 and first functional in Season Five.

The gift is obtained via completing various objectives in the Season Journey, with three different achievements each granting 2 pieces of a predetermined (by class) item set. This feature is a way for players to quickly gear up their first character each Season, getting them into 2, then 4, and finally 6 pieces of an item set and greatly boosting their performance once they reach level 70.

Each of the three stages of the gift can only be claimed once, by the first character on your account to finish that objective in a new season. Most players will earn all three with the same character class, but it's possible to switch between different characters and earn the 3 gifts with 2 or even 3 different classes. (Though this is not recommended, in terms of building a strong character you want the whole set on your first to 70.)

There were no substitutions possible and each class got 2 items from each set, with each gift. The total was all six items filling the set, and obtaining them via Haedrig's Gift was a way to get geared up much faster than anyone could have found the items playing normally.

Season Five required players to complete the following objectives on the season journey achievements to grant the Gifts.