The Black Rock Ledger is made up of pages strewn around Sanctuary. There are six pages known to be in the game although the original ledger is at least 42 pages in length.

It is not known what the pages are for or if more will be added with patches but it's hoped it'll lead to another secret level like Whimsyshire.

If the numbers seem familiar it might be that you recognise them from the TV show LOST. The numbers were a running story element throughout the long-standing series and caused much speculation. The first letter from each of the six pages spells out DHARMA a secretive initiative that appeared in LOST. If the acronym is significant in Diablo 3 that would suggest there are no more pages in between those already in the game.

Staying with LOST, The Black Rock was a mid-19th century ship that became shipwrecked en route to a mining colony and ended up on the other side of the island, well away from the sea.

Damn, I always thought that being a first mate would be more exciting. I guess I shouldn't expect much from a mining expedition. Ever since we set off from Kingsport, all I've done is sit out on deck and watch the deckhands argue.

Haven't been able to get much sleep these past few days. Apparently my sea legs aren't as sturdy as I thought they'd be. I've vomited more times than I can count, and every time Captain Hanso offers me some ale, I have to come up with some excuse to decline.

After three straight days of this storm, I'm almost convinced that this ship has some sort of curse on it. Each week brings some new trouble that I have to deal with. I'm not sure what will give out first, the ship... or me.

Reyes tells me that it was some colossal wave that did the ship in. I was down below when it all happened. Several of us survived the wreck. The rest of them have gone off to try and figure out where the hell we are, as if any of that matters.

Madness, complete bloody madness. The captain has disappeared into the desert somewhere, and the rest of the survivors are convinced there's some sort of monster after us. I'm starting to think the crewmen that died in the wreck got the easy way out, lucky bastards.

All the rest of them are dead now... I'm the only one left. Strange deformed creatures attacked the wreck, where most of us were sleeping. I managed to get away safely... but I don't imagine it will be that way for long. I can hear... giggling in the shadows, like this is some kind of game. -- First Mate McMahon

All the pages can be found in four locations within the Stinging Winds. A miner will appear next to the wreck of a ship which can spawn in one of the four locations. These are marked on the map below.

As you approach him he will say Be careful... this ship is cursed by demons! We should be safe as long as we don't disturb it! Unfortunately at that point a Fallen Lunatic runs up to the miner and explodes taking the miner with him in a bloody mess. The miner will always drop one of the six pages.

The pages can not be sold but they can be traded in-game so if you get duplicates you can share them with friends.

To farm this area choose the quest City of Blood at the menu screen. You'll appear in the Hidden Camp. Take the Waypoint to Khasim Outpost. Just outside of the south eastern exit of the Outpost into the Stinging Winds (east) you will pass a Checkpoint so once you've searched the four locations you can Leave Game and simply Resume at the menu to begin at that checkpoint and visit the four possible sites again.

The shipwreck may not spawn at all sometimes. 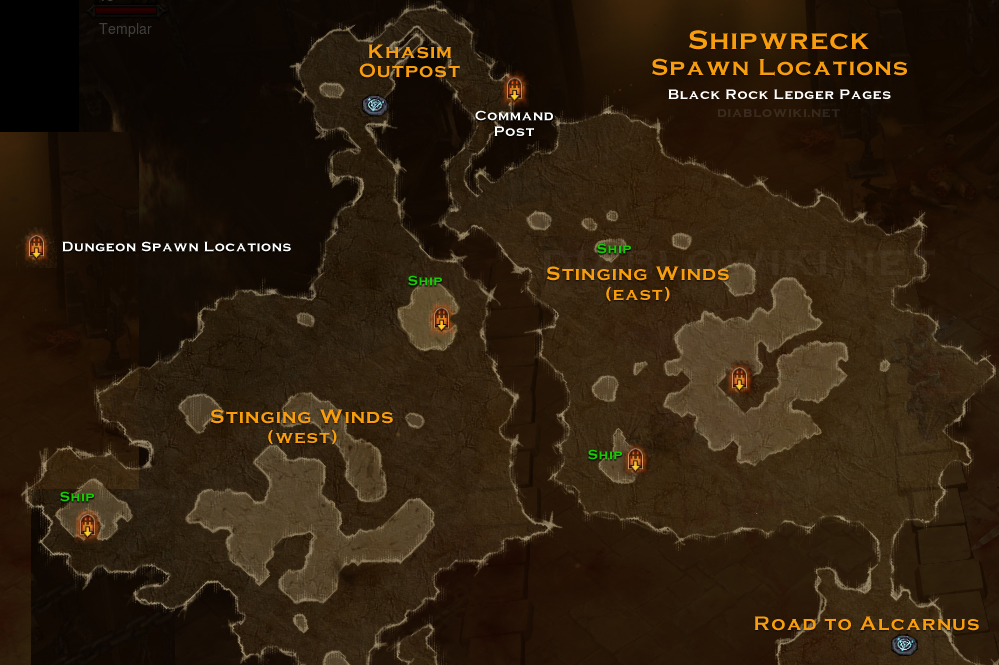 These instructions are for a temple rush (TR) monk and a critical mass/wormhole (WH) wizard. With this two-person team, you can find all six pages in an afternoon. The builds are dependent on user preference, but the wizard needs to have an attack to proc cm. I used meteor and disintegrate with the entropy rune, but energy twister would work just as well.

The enemies need to be kept alive long enough to regain spirit and proc critical mass, while they also need to be easy enough to not kill you as you are rushing through the map. Thus, you do not want to select a monster power (MP) too low so that enemies die in one hit. If you normally farm MP 8-10, select MP 5. This way, you can attack the cluster of fallen to restore teleport, then wormhole past the cluster of wasps.

Referring to the image above, that illustrates shipwreck locations, the spawning locations for the ship are listed by the green word. However, the ship does not always spawn and you have a chance of a dungeon, landmark, or encounter occurring in those spots each time the map loads. If you see one of these spawn in all four locations during a run, leave the game and start a new one.

The Black Rock Ledger is a nice little mystery, isn't it? If you're lucky enough to collect all the lost pages, be sure to examine them closely. The devil's always in the details. ;)

Some one replied, "From what we gathered and seen so far its a reference to the show lost. Lol" There was also subsequent posts elaborating on the significance of the page numbers and the characters mentioned in the letters being a Lost reference.

Then the blue replied with a broken link and said, [2]